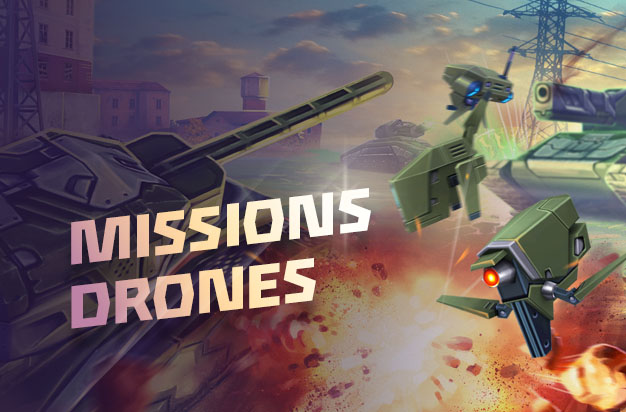 Halloween is very close! And with it, as we’ve promised earlier, a truly mega release!

In the next several days a ton of new and interesting features are coming to Tanki Online. Today we will tell you what’s coming after the restart on October 30th, and it’s just a start.

Here the most significant change us the rework of the weekly mission chains. They will be removed from the game, and in their place weekly missions will be added.

Each week you will get 3 missions, which you need to complete within 7 days. The first mission is one of the standard daily missions, but with increased requirement for finishing it. The second and the third missions are always the same, and to complete them the player needs to finish 10 and 20 daily missions respectively.

Among the prizes for weekly missions are regular containers and new weekly containers, which have some number of crystals and supplies, corresponding to your rank. If you will complete all 3 weekly missions, the overall prize will be not less than the sum of bonuses from completing a level 10 mission chain — without the need to maintain mission chain 9 weeks prior to reach the maximum level!

Also, “Collect supplies” missions will be possible to complete by activating the required supply, and the 3x hours of Premium reward will be removed from the game.

Daily missions will become slightly harder, but the rewards for completing them will also increase. Each day you will be able to earn more.

With server restart on October 30th all your current missions, regardless of their progress, will be completed automatically, and rewards for completing them and any rewards that are not yet collected will be added to your account. Of course, mission chains that are already started will not disappear: we will increase their level by 1, complete them and send their rewards to your account.

Also in the mission window, next to the “Daily” and “Weekly” tabs you will see 2 more new tabs, that can’t be accessed yet — “Main” and “Challenges”. These sections are currently in development and we will tell more about them later.

Tomorrow, 9 new cool drones will appear in the game:

«Miner» Drone
Defence drone. Allows for a certain number of mines to survive after the owner’s tank was destroyed.

«Camper» Drone
Support drone. Speeds up the recharge time of supplies when the tank is at full health.

«Blaster» Drone
Assault drone. Blows up the tank after its destruction or self-destruction, damaging all nearby enemies.

«Saboteur» Drone
Defence drone. After placing a mine will also place several additional mines around the spot.

«Sprinter» Drone
Assault drone. After picking up the flag, the ball or capturing a control point gives the effect of Double Damage, Double Armor and Speed Boost for a short time and repairs the tank.

«Trickster» Drone
Support drone. After activating Speed Boost cancels the reload on all other supplies and shares this effect with nearby allies.

Find your own drone! Open the Garage tomorrow and choose a trusted battle companion or find several in one pack in the Shop. You can check out drone parameters  and prices in the Wiki.

Check out the update tomorrow and share your thoughts on the release in the comments! Follow the news, as very soon we’ll share the info on the next big updates — new alterations and overdrives.

The full list of Patch Notes will be posted on the Forum later today.

We also remind you that starting tomorrow and until the end of the week a spooky holiday event with double battle funds, Star Hunt and discounts will await you in the game, and you can find the full event details here.

Have an awesome Halloween!