How to start playing

This page will help you to become “an experienced beginner”, who doesn’t ask silly questions in game chat and enjoys the game more.

Game Loading
To play the game you do not have to download and install any programs; only Flash Player is needed. If you watch YouTube — you already have it on your computer. In case your Flash Player version is old — update your current version or install a new one.

The First Battle
Right after registration you will enter a special battle. All the players in this battle are newcomers. (i.e. their rank is equal to yours). Here you will learn to operate your tank and understand the basic functions of the game.

Tank Controls
Your tank can be controlled with the arrow keys or W,A,S and D keys. Press Spacebar to shoot, press Z and X to rotate the turret. Arrows or WASD keys – the tank’s movement keys (you can also use arrow keys on the numeric pad when the NumLock is off).
Z and X or < and > – Turret rotation.
C or ? – Center the turret.
Spacebar – Shoot.
1–5 – Use supplies (First Aid, Double Armor, Double Power, Nitro, Mine). The effect of each supply lasts for about 1 minute.

Enter – Type a message in the chat, press Enter again to send the message.
Tab – Switch between Team chat and General chat with a chat window opened.

F – Drop the flag. (Available in Capture the Flag mode only).
Tab – Shows the scoreboard of current battle. The scoreboard displays the names and scores of the players participating in the battle.
Del or Ctrl+\ – Self-destruction. It takes time to self-destruct. A skull will appear in the center of your screen. You can also self-destruct by driving your tank off the edges of certain maps.
P or Pause – Pause.

Please note: Pressing multiple keys simultaneously may cause errors on some PCs, especially when arrow keys are used for movement. It may mean the tank is unable to shoot while moving, or rotate the turret while shooting. We don’t yet have an option to customize controls, but you can use the WASD keys as alternative controls.

Game Menu (Lobby)
Once you have finished your first battle, you will see something like this on the screen:
Chat on the left, battle list in the middle and details of the selected battle on the right. 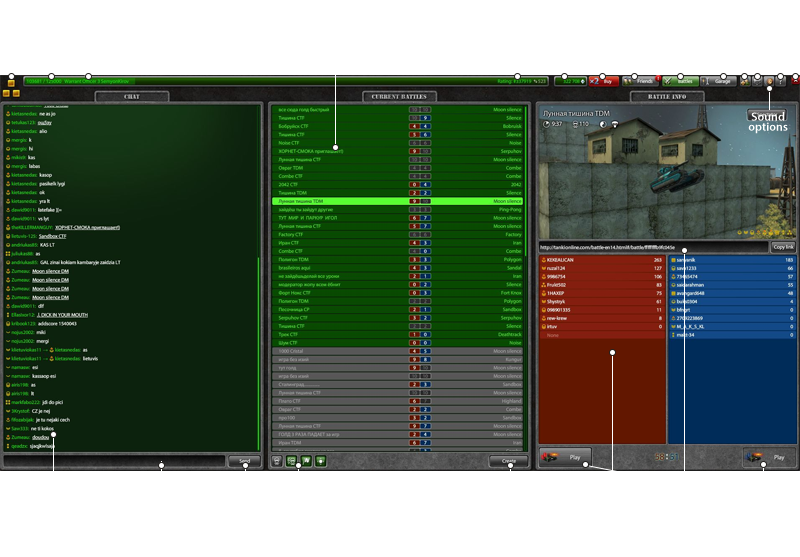 To enter a battle, choose any battle highlighted in green and click on the Play button under the details of the battle you selected.

Click the Create button at the bottom of the list of battles to create your own battle. The battle creation menu will appear. Not all maps will be available, but as your rank increases, more maps will become available.

The Play button may be disabled if the battle is full (maximum amount of allowed players) or if your rank isn’t permitted in the battle (too high or too low).

Please note: You can only create a battle within a certain range of ranks close to your own.

Have fun while playing! Stay with us!

©2010-2022 Alternativa Game Ltd. All rights reserved. Published by APL Publishing Ltd.
Search
Announcement type: All Events Videos News
Request to customer service
You don't have an email address linked to your account. You will need to have it linked in order to send a request to our customer support service.