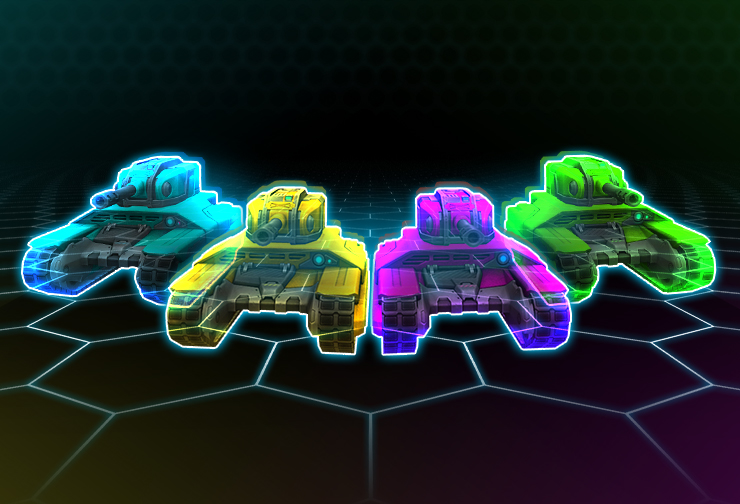 We are glad to introduce you a new interesting event!

From 2 AM UTC November 21st, till 2 AM December 12th, we invite you to join our treasure hunt! Explore the map of the mysterious island together with your team. Go in search of treasure and dig up valuable rewards!

Let’s get into details.

How to take part

The search begins at 2 AM on November 21st. To take part in the special «Arcade» event, you need to purchase a ticket in the form of the special «Press Start» offer, that includes paints of all 4 factions:

Important: All 4 paints will remain on your account no matter what faction you join. The paint you equip does not affect the stars you earn.

Right after purchasing this special «Ticket», you will be added to one of factions. Together with your teammates you can start looking for treasure! The «Ticket» will be available for purchase until December 12th at 2 AM UTC.

Based on experience with previous events, players will get disappointed after seeing that they have been added to a losing faction. So this time we included an option to change your team.

To change your faction you need to purchase the special «Change character» offer, that includes:

Each faction has its own token that will be used for moving around cells of the game board to look for treasure chests.

With the start of the event, you will be able to access the special «Arcade» event website. There you will find a map of the treasure island on which you will vote where to move your team’s token next at each turn in search of treasure.

The event’s time is limited, and it can also end earlier if the right conditions are met.

The map consists of multiple cells, and you can move around them without any special restrictions.

The map is completely covered with fog, but areas visited will be cleared so that a faction does not get lost and can know which cells they have already explored.

Each faction has its own token to move around the map with.

Each turn, players vote on where to move their faction’s token to.

Important: If multiple cells tie for the most votes, the move will be chosen at random.

Before starting the next turn, a faction’s token is moved and the fog around the next cell clears:

If multiple factions decided to go to the same cell:

If a faction stays on a cell, and another team votes to move to this cell:

If a faction opts to stay on a cell, and multiple factions vote to move to this cell:

If factions vote to move to cells of each other:

All experienced treasure hunters use this tool to find treasures as quickly as possible.

Many of you know the «Hot or Cold» game. Our Metal Detector works in a similar way.

During a turn (and while players vote where to move), players can scan cells closest to their token with a metal detector.

Once turn is done, Metal Detector shows how close you are to a nearest treasure chest:

You can scan a cell using tankoins. The total cost of scanning one cell is 2000 tankoins per faction. The minimum payment from a player to fund the scan is 10 tankoins.

Tankoins spent are summed up, and the scan starts as soon as the crowdfunding collects the required amount.

Well, now let’s talk about the most important thing, the goal of the event — treasures!

Factions need to find treasure chests which are hidden in special cells of the map.

Here are the rewards you can get from the treasure chests:

Once the event is over, we will open the treasure chests your faction received and will deliver the rewards.

To make it easier to communicate with teammates, we will add chat channels in the Lobby. Each faction gets its own channel. Only the faction’s members can see it.In these chats you can discuss your tactics, share leaks of other factions’ progress, and discuss your next movements.

Good luck with your search, our dear tankers!