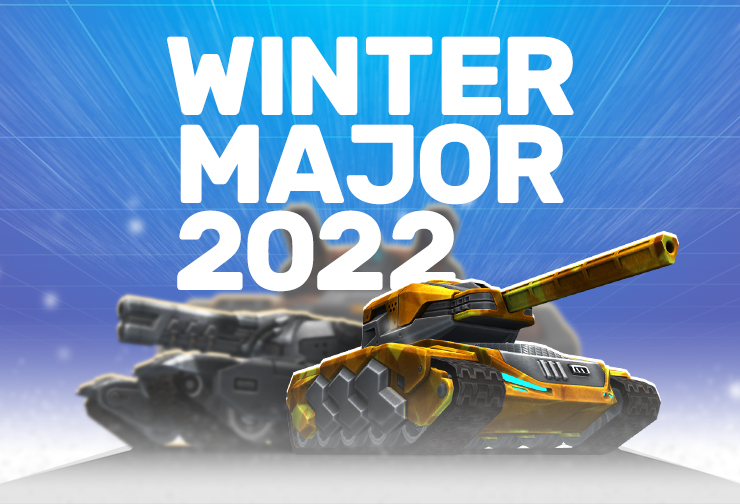 There are just a few days left until the start of the biggest eSports tournament this winter, so now is the right time to share all the details of the upcoming event!

What is eSports up to nowadays?

eSports nowadays consists of two seasons per year, and each of them includes a series of qualifying ranking tournaments and finishes with a Major event.

The 24 best teams (according to rating points) take part in two rating (qualifying) tournaments to get a place in the main tournament of the half-year – Major, and to compete for a solid cash prize.

I don’t play eSports, what can I do?

Don’t worry. All the qualifying tournaments of the year are over, and the teams participating in the final tournament have been determined, which means it’s time to become a viewer!

Join livestreams on our Twitch channels, follow them, watch eSports matches and keep track of results.

For watching eSports livestreams, we reward each tanker with an Ultra Container for 20 minutes of watching each broadcast. To have your watch time counted, you first have to link your Twitch account in the game settings.

Read more about how the «Twitch Drops» system works in the special announcement.

Follow the news in the game so as not to miss our livestreams!

When will it start?

This Monday, the Challengers stage begins and will last from October 31st till November 14th.

The 16 lowest-rated teams out of the total 24 will take part in this stage. The best 8 have already received a place in the next stage.

Next, we will have the «Legends stage» from November 21st till December 8th. The top 8 teams which have automatically advanced to this stage will join the 8 best teams from the Challengers Stage. These 16 teams will compete for a spot in the Champions Stage.

Of course, what is eSports without the Tanki Fund! In addition to Ultra Containers, you receive for each livestream, right before the start of the Legends stage, we will announce the «eSports Tanki Fund».

It works in the same way as the regular Tanki Fund, with one exception: 10% of the fund will be divided between the 8 teams that have reached the Champions Stage.

In the Legends stage, you can choose your favorite team, purchase special offers in the Shop, and thus not only help your favorite team but also get a chance to win Tankoins as well as receive guaranteed prizes from Tanki Fund levels.

The recent «eSports Tanki Fund» not only scored the maximum number of possible guaranteed prizes, but also resulted in record-breaking participation, having collected more than 18 million tankoins! We are very glad you liked it, and we have no other way but to bring back the Tanki Fund again for this Major tournament.

The last 8 matches will happen in the Champions stage, and the 8 best teams will fight for cash prizes from December 11th to December 18th.

The quarter finals, semi finals and grand finals — just 3 steps for a potential winner to prove that they are the best team!

The hottest matches and the fate of the cash prize lie in these final matches!

Anyone who has seen at least one Grand Finals livestream before knows that you definitely shouldn’t miss it!

Don’t miss the livestreams of eSports matches on our Twitch channels! Root for your favourite teams, watch interesting matches, and get yourself some cool rewards!