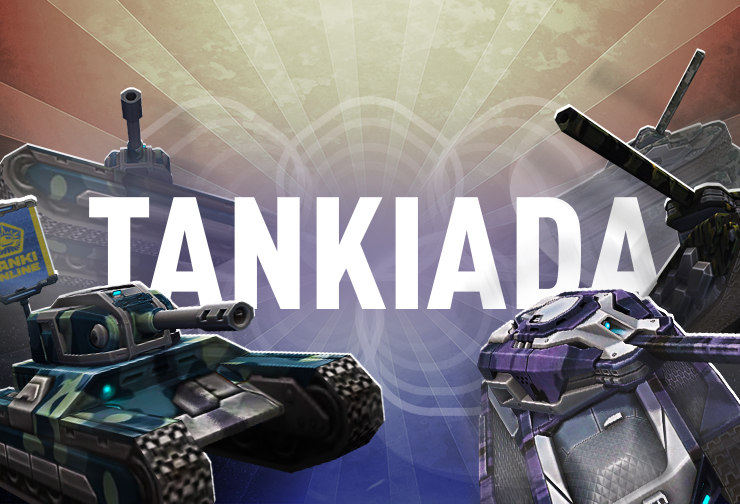 The Olympic flame has arrived in Tanki!

Check your engine, dust your skin, fill your fuel tank and be ready for the «Tankiada» games!

«Tankiada» is a great chance to show everyone how skillful you are and in the process be able to earn prizes. Participants of Tankiada will need to go through a difficult, but a fascinating journey. Prove your skills and win the fans’ sympathy. Here everything matters; your speed, your tank control skills, quick and correct decision making abilities, and even your teamwork skills. Sounds interesting, right?

Task: to be the first to proceed through the 4 stages of the race and deliver the flag to the finishing platform by passing it onto each other.

Equipment: Wasp and Smoky (all participants will get fully upgraded Mk7 versions of these items for the duration of the event), any paint.

Rules: 32 main + 16 reserve players will take part (8 teams, each consists of 4 main and 2 reserve players). Reserve players are needed in case one of the main players doesn’t manage to come. The order of substitutes is the same as the order of players in the list of participants.

A team will need to proceed through the 4 stages of the race passing a flag to each other. All 8 teams will be divided into pairs. A winner of a pair proceeds to the semi-finals. Winners of both semi-final matches proceed to the finals.

The team with the highest spirits is going to win!

Important: Attacking opponents and interfering is prohibited. Violators will be disqualified.

The winning team will get:

The second-place team will get:

Task: come first in a race. However, it is prohibited to come out of the track and you must be constantly rotating your turret in one direction. Qualifying stage consists of 10 races, 10 players take part in each of them. The first player from each qualifying race goes to the finals where the 10 best players will be competing for the prizes. The fastest is gonna win!

Equipment: Hornet and Railgun all participants will get fully upgraded Mk7 versions of these items for the duration of the event), any paint.

Important: Attacking opponents and is prohibited. It is also forbidden to stop rotating your turret. Violators will be disqualified. Pushing each other is allowed.

The qualifying stage will start at 4 PM UTC on September 17 and won’t be broadcasted.

Specially for this major event, two maps will be added to the game: «Relay Race» and «Headspinners Race». You will be able to create PRO battles on these maps starting from 2 AM UTC September 16 till 2 AM UTC September 18. Participants will have some time to check out the maps before the races and others can take screenshots to show to new players.

How to take part in «Tankiada»?

Any player can take part in «Tankiada»! The registration is opened on the special website. It will last till 1 PM UTC September, 14 and in a few hours after it ends, we will randomly choose tankers who will be participating in the event. Don’t worry, we are going to pick a lot of players!

After that, we will contact the players on this special website and will give them further details.

Important: You may apply to both disciplines at the same time. Be aware that by signing up, you confirm that you are ready to take part in the battle at the announced time with no delays.

There will be livestreams of the entire competition on our official Youtube channel.

Watch the livestreams, cheer for participants and the most attentive viewers will get in-game bonuses!

Good luck! May the best player win! If you have any questions, don’t hesitate to ask in comments.