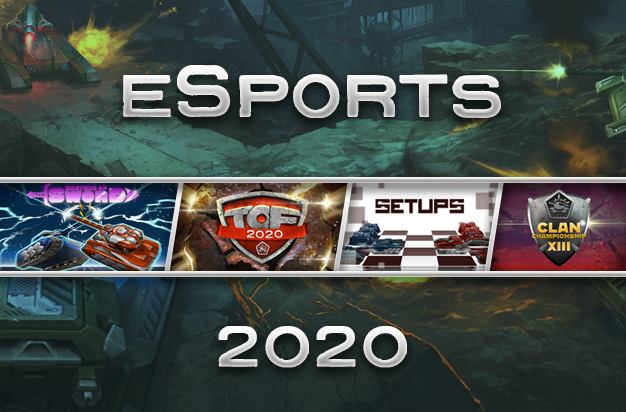 This year was particularly rich of eSports events in Tanki Online:

Let us look back at what the world eSports was like this year.

After these tremendous events, we took a break from big tournaments and held two smaller tournaments: Summer Light and the oldest tournament in the Tanki eSports, TOF Dream Team.

The main event of 2020 was of course, the Clan Championship, the main goal of all, because that’s where the Champion, Silver, and Bronze paints are drawn. Twenty-four teams participated in this tournament. Eternity, Team Pointers, Revenge, and Legacy went to Play-Offs. Then, after a two-week break, we had a total blast!  After seven days of hard matches and intense battles, Revenge took the title. It was them, who made it to the upper grid, leaving no chance for Eternity and Team Pointers, and then defeated Team Pointers in the Grand Final for the second time and took the most prestigious paint of the game – Champion, with a 25% module against all turrets and mines.

Traditionally, summing up the year, we also would like to announce the best eSports player of 2020!

For his achievements this year, he will be awarded with:

We also want to point out players, who achieved very high results this year: Marekos1111 and lenyamal.

Preparing for next year. A survey.

Preparations for next year’s tournaments are already underway. While the organizers are working on the technical part of preparing new tournaments, we would like to know what you guys want to see in 2021.

We have already launched a survey, and every eSports player who played at least one clan match in 2020 can take part in it. We want to know your personal opinion about the format of the tournaments, the number of transfers, as well as what format, in your opinion, is the best at the moment.

Be sure to vote in the survey as every vote is important! The results of this survey will shape next year’s calendar and the format of all tournaments.

We would like to thank all the teams for the incredibly interesting matches in 2020!
We look forward to seeing you all in the next year!