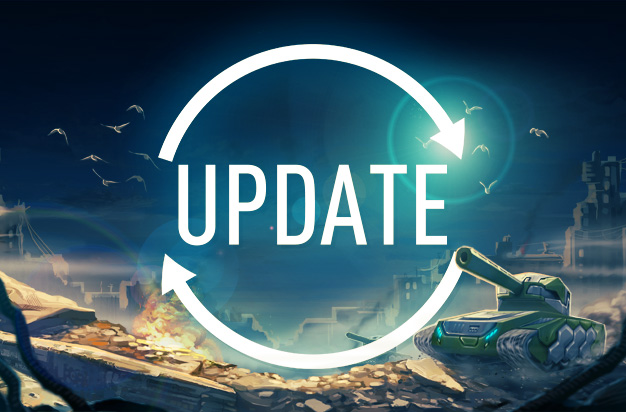 With tomorrow’s servers restart on October 29th 02:00 UTC, a new update will be released.

We have worked hard to consider the possibilities of Hornet’s «Scout Radar» overdrive and have made some changes in the game according to the consideration.

Many of you like Hornet’s OD because it gives the mighty ability to ignore any type of protection. On the other hand, it’s very hard to stay alive when you see an opponent with this overdrive activated.

Based on the working principle of this overdrive, we have created some new Augments for turrets and hulls which will give you more tactics to use in a battle.

The new «AP Immunity» will be available for all hulls.

Using new augments for turrets, you may apply the armor piercing status effect to other tanks even without Hornet equipped.

Turret: Freeze
Augment: Toxic Mix
Description: Swaps the cooling agent with toxic mixture. Damage is decreased, but an opponent affected by the mix cannot use armor for some time.

Turret: Hammer
Augment: Armor-Piercing Shot
Description: A perfect farewell gift. The last shot in the clip destroys the armor of any tank which was hit.

Turret: Ricochet
Augment: Super-smart Minus-Field
Description: It is not certain how this super-smart minus-field is smarter with this augment, but after ricocheting, rounds pierce the enemy’s armor, leaving no chance of survival.

Turret: Smoky
Augment: Armor-Piercing Rounds
Description: Replaces common rounds with armor-piercing ones. Critical damage is decreased, but an opponent becomes armorless against the next shots.

Turret: Striker
Augment: Armor-Piercing Missiles
Description: The perfect augment for bounty hunters who want to destroy one very powerful target. Only one fast-targeting armor piercing rocket per launch. Any tank hit by this rocket will not be able to use armor for some time.

Turret: Railgun
Augment: Super Armor-Piercing Rounds
Description: It is not enough to just pierce an enemy tank’s armor — the enemy should remember this forever. Special rounds destroy armor for some time, long enough for one more fatal shot. Piercing the armor of multiple tanks in a row applies the AP effect to all of them.

Turret: Magnum
Augment: Harpoon
Description: Changes shot angle to 3%, changing Magnum from artillery launcher to be like any other turret. Splash damage is decreased.

Turret: Shaft
Augment: Armor-Piercing Sight
Description: Special sight which lets you destroy a target’s armor with any sniper mode shot. Makes the next shot at the target very sensitive or maybe even fatal.

Some important changes of Hornet’s Overdrive have also been done.

Instead of ignoring all other tanks’ armor, Hornet’s Overdrive will be applying the armor piercing status effect to all visible tanks at the moment of activation.

It is definitely worth trying out the new Augments and the Hornet’s revamped Overdrive. Maybe it is even a good idea to combine them?

You can get the new Augments from Ultra Containers.

Enter the game tomorrow and try the new playing style!