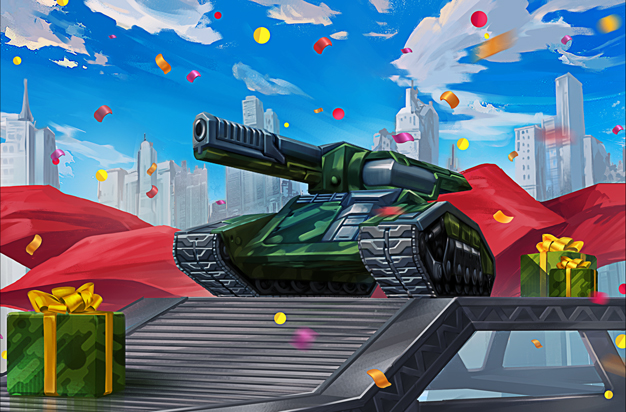 Massive festive celebrations will last for five days: from Wednesday, September 9th at 2:00 UTC, until 2:00 UTC on Monday, September 14th.

And now for the details!

Ever since summer ended, everyone has been asking the same question: “What will happen with the boosted summer funds and experience?”. We analyzed the data, discussed it and decided to change the current parameters. From the restart on September 9th, the experience will increase to x4, and the funds will stay at x2.

And during Tanker’s Day, the above funds and experience boosts will be doubled in matchmaking battles.

Perfect opportunity to rank up (maybe even multiple times) and earn some crystals for shopping!

In the upcoming weekend, from September 12th, 2:00 UTC until September 14th, 2:00 UTC, the festive mode “Solo Juggernaut” will appear in Matchmaking on the Magistral map. Become the Juggernaut and challenge your opponents!

In addition to that, this map will be expecting a massive goldbox rain. Be prepared: it will not be easy to stay at the top of the leaderboard!

Tankers day is not only one of our main holidays, but it is also a long awaited sale. Buy the newest equipment and upgrade it too – for only half the price!

We know that you like opening containers and that you also want to get cool skins.

During the whole holiday, coinboxes and Ultra Containers will be replacing normal containers in the Shop.

From the Ultra Containers, you can get crystals, supplies, goldboxes, premium, a variety of paints, augments, XT and PR skins, coinboxes, unique augments and the new Ares XT skin, augments for Ares, and also the “Crisis” drone.

These prizes are available from coinboxes:

As is the tradition, we are looking for the lucky tanker who will get 100 000 tankoins and become a tank magnet in no time. Did you get it? If so, share a screenshot!

Three festive special offers are waiting for you in the shop! You can choose!

The headquarters are testing the combat readiness of the tankers!
For that, they created special missions with different standards.

If you complete it successfully, you will be rewarded the great prizes.

To support the festive atmosphere and the combat mood there will be:

Enter the game tomorrow and join in on the celebrations!
Good luck on the battlefield!