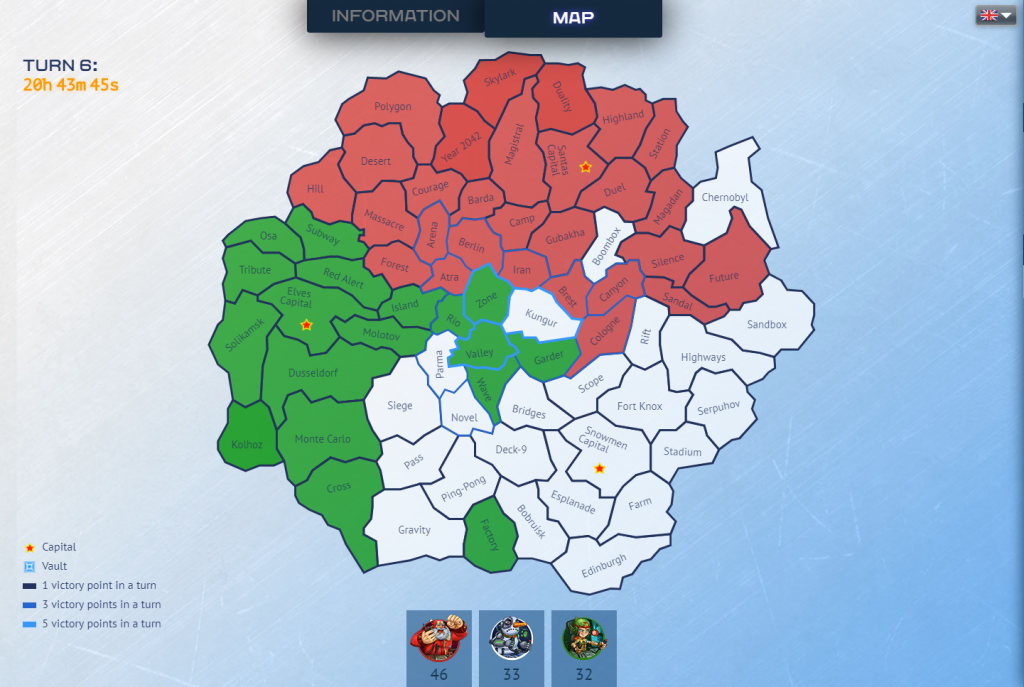 You’ve been keeping yourselves busy on the battlefield, and it shows, because the situation on the War map has changed significantly.

The War is now in a phase of conflict.

Now, actions in the War are not as predictable as they were during the initial turns. Factions are actively attacking each other, capturing and defending regions, and even attempting to surround opposing factions.

They’re determined not to let the Snowman ruin the festivities, proving to the Elves that Santa isn’t as old and weak as they expected.

Santa’s faction currently has 46 points for its occupied regions. Snowmen are in second place with 33 points, while the Elves are trailing behind them by just 1 point.

Additionally, all bonus regions have been captured.

The members of the conquering factions have already received their additional containers. Therefore, it is no longer possible to get bonus containers from these regions anymore. However, they will still reward 3 points for their occupation, so don’t ignore them! The bonus regions are Desert, Gravity and Future.

Discuss in the forum
News
Thunder HD
Secret party is coming back!
Tanki Online V-LOG: Episode 345
Ultra Weekend June 24th – 26th
Tanki Fund Giveaway
All news
©2010-2022 Alternativa Game Ltd. All rights reserved. Published by APL Publishing Ltd.
Search
Announcement type: All Events Videos News
Request to customer service
You don't have an email address linked to your account. You will need to have it linked in order to send a request to our customer support service.