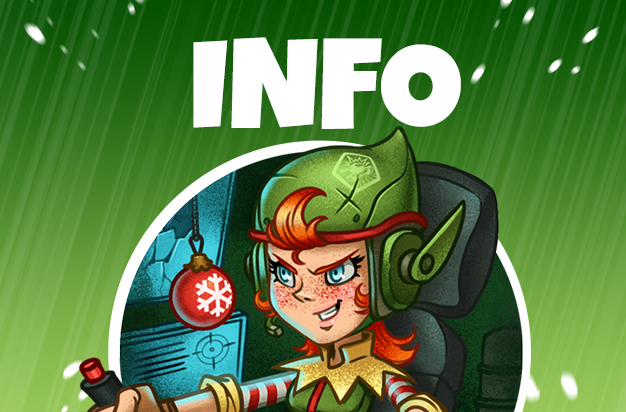 Things are getting heated. The festive season is coming, but nobody knows whether it will happen or not. The Snowman, Santa, and the Elves, are preparing their war machines for a great war on the Tanki world map.

How to participate in the war

In order to join a faction in this WAR, you need to buy the special «Distributor» paint. The paint will be available in the Shop for the price of 10 tankoins.

Upon buying the «Distributor», you will randomly be assigned to one of three factions — Snowmen, Santa and Elves.

The «Distributor» paint will become available in the Shop before the start of the event, and you will be able to buy it anytime throughout war.

IMPORTANT: While you need to purchase the special paint to participate in the WAR, there is no need to equip it.

For the «WAR – Stolen Christmas» event, we’ll be launching a special website with the map on which the action will happen. On this website, you will be able to choose regions to attack and defend, follow the progress of the WAR, and track your own statistics in the event.

When you open the website, click “Enter” in the upper-right corner. You will be redirected to Tanki Online, where you need to log in to your account. After logging in, you will be redirected back to the WAR website (it may happen automatically if you have enabled the «Remember me» setting.

The link to the website will be published before the event starts.

The collective goal for each faction, is to capture and defend as many regions of the map as possible. Regions will give different amounts of points. Peripheral regions will give 1 point, regions close to the centre and bonus regions will give 3 points, and central regions and capitals will give 5 points. At the end of the WAR, the faction that has collected the most points for capturing regions, wins.

How the battle for territory will proceed

The «WAR» is played in a turn-based format, where each turn lasts for 23 hours (from 7 UTC to 6 UTC of the next day).

You will need to do two things — first, you’ll need to choose which regions on the WAR map you want to fight for.

When choosing territories, you must pick two:

After confirming your choice on the WAR website, you must go into matchmaking battle in Tanki Online and earn Stars by defeating other players.

Every turn starts with 0 Stars. Once you’ve earned your first 5 Stars, you will be able to pick territories. As soon as you’ve made your choices and confirmed them on the WAR website, any Stars you earn will be added to your faction’s progress on the regions you’ve chosen.

ATTENTION: In a WAR turn, only Stars earned after confirming your vote on the website are counted. If you didn’t confirm your vote, or didn’t earn at least 5 Stars, your participation in this turn will not be counted, and you will not earn any rewards.

Each faction may attack and defend multiple regions at the same time, but the result depends on how many players have picked those regions, and how actively they have played.

When a faction attacks an unclaimed region, or an occupied region that isn’t being actively defended, the region is taken over by the attacking faction if at least one player who attacks this region has confirmed their vote and earned at least 5 Stars.

When a faction attacks an unclaimed region that is also under attack by another faction, or an occupied region that is being actively defended, the region is taken over by the faction that has collectively earned more Stars than the opposition.

The more and the better you play, the more Stars you will get. The amount of prizes that you receive also depends on the number of Stars you earn during a turn.

We will reveal the prizes in the next announcement!

The progress of every faction will be shown on the WAR website.

We will also tell you more about the start of the WAR at a later date.

Stay tuned and ask questions in the comments, and we will answer the most frequently asked question in our upcoming announcements!

REMEMBER: The WAR is a team competition, and to win, your faction needs to coordinate the actions of all faction players. You can do that using any available platform — in the game, on the internet, in chat, on the Forum, on social media, or anywhere else. For each faction, we will create a subsection on the WAR sub-forum, where you can discuss strategies, choose territories for attack and defense, and coordinate yourselves in battle.

The event is designed only as an entertaining, fictional activity, and has no connection to real names, people, organizations and events in the world. Any similarities are coincidental. The event does not, in any way, provoke or encourage real life violence, extremism or violation of international laws. The company is not responsible for any actions that harm the user or break international laws and/or Game Rules. For breaking the rules of the game or the event, participants can be disqualified from the event and its rewards.