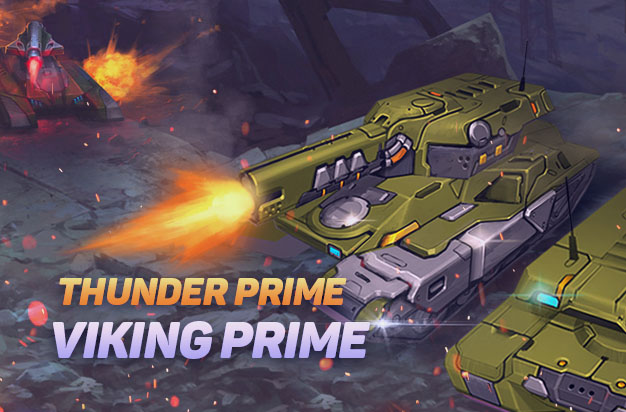 In the episode 229 of the V-LOG, we showed you the newly-redesigned Viking Thunder Prime — the cool one with new effects and animations.

This Prime skin is not just a more detailed, higher-polygon model. It also has some cool features, including a recoil animation while firing, smoke from the shot, exhaust gas from the turret and engine, and even redesigned tracks that you can actually see through.

We also told you that you’ll be able to buy the Viking and Thunder Prime skins during our Black Friday event.

Here’s how that will work:

The skins will appear in the new Showcase.

So, to clarify, you’ll have multiple opportunities to get both skins throughout the three days of celebrations.

If you’re still on the Flash version, you can get the skins from the Shop.

But that’s not the only way you can get them.

If you already own Viking or Thunder Prime from one of our challenges, it will automatically be updated to the new skin. You won’t need to lift a finger! And those of you who played Tanki X and activated the special promo code in Tanki Online, will also receive it.

There’s also a chance of getting them as random drops from Containers, just like any other skin.

So, it’s up to you how you wanna get hold of the newly-redesigned Viking Thunder Prime. All we can say is, it’s definitely worth getting!