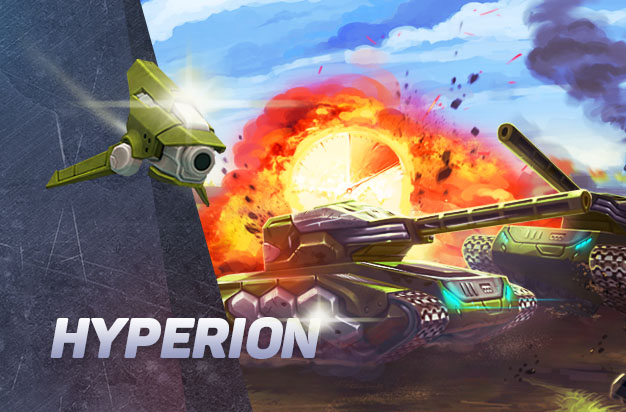 Here are the details.

Hyperion is a passive drone. It eliminates Smart Cooldowns and decreases cooldown for Double Armor, Double Damage and Speed Boost based on its upgrade level. Cooldowns for Mines and Repair Kits are not affected.

By upgrading Hyperion can decrease the cooldown until it is completely eliminated, allowing for uninterrupted use of Double Armor, Double Damage and Speed Boost, even at the same time.

Of course, such power must come at a cost.

First of all, Hyperion will unlock at Legend rank (except when purchased in a special bundle — more on that later). This will protect low and mid-rank players from being overwhelmed by players with tons of supplies.

But here’s the key point — In addition to Batteries, the drone will also consume multiple Supplies. And the higher its upgrade level, the more Supplies it will consume per use.

Hyperion will make you a powerhouse, but you’ll need to find a balance between Supply spamming and rationing.

How it will affect the game

Hyperion will change the dynamics of the game in multiple ways.

Battles at Legend level will become faster and much more aggressive overall. Legends will have the power to decide how to use their Supplies, but will also have to suffer the consequences if they mismanage their inventory.

Modes such as CTF will also see an important shift in dynamics. Faster cooldowns means the average speed of flag stealers ​​will increase, which will force teams to reevaluate their tactics.

How to get it

You will be able to buy Hyperion normally from the Garage.

However, during the Black Friday 2019 event, we’ll also have a special Bundle. It will unlock from Marshall rank, and will include:

The Bundle will become available at 02:00 UTC on Saturday, November 30th, exclusively in the HTML5 version of the game.

HOWEVER, if you buy the Black Friday Special Bundle (containing 5 Containers, 300 of each supply excluding Gold Boxes and Batteries, and 100 000 crystals) on Friday 29th, you will get an EARLY UNLOCK of the Hyperion Bundle, so you’ll be able to buy it before everyone else.

Hyperion will bring some big changes to the game. We’re aware that some players might find some changes disorienting at first. But we believe that ultimately Hyperion will make the end-game more exciting.

Remember, Hyperion is not meant to replace all the other drones. Nor is it intended to reduce all tactics to mindless supplies spamming. Yes, it is indeed powerful, and it allows supplies spamming, but it doesn’t offer neither the immense power of the Booster drone, nor the mine shenanigans of the Saboteur.

So, try out Hyperion when it comes out. Spend some serious time with it and learn how to balance its massive advantages with its harsh demands. Then, come to the forum and tell us what you think.

The first mechanic will give you extra points for helping out teammates.

For example, with the current system, if you play a Mechanic drone, and several allies are within your drone’s area of effect, you will simply be repairing them.

But with this new feature, you will also receive extra points for each teammate that you repair. This will help support drones to reach their full potential.

The second mechanic speeds up the recharge time of supplies when using other supplies. The mechanism only affects one supply type, which is assigned to the drone.

For example, the Miner drone will reduce the reload time of your Mines every time you use any other supply. The purpose of such a mechanism is to allow certain drones to be used much more often.

The third mechanic consumes several supplies at a time when activating a drone.

For example, the Lifeguard drone will use up several Repair Kits each time it saves a player from destruction. Here, the intention is to balance strong drones without reducing their usefulness.

These balance changes and new mechanisms are intended to make Drones better suited to the new environment.

As with Hyperion, we urge you to take some time to adapt and familiarize yourselves with these new mechanism before passing judgement. However, we look forward to hearing your observations. In the meantime, we will continue monitoring the situation with Drones and fine-tuning as required to achieve a balance that players can enjoy while safeguarding the integrity of the game.

For the complete updated list of Drone descriptions including Hyperion, please see the full announcement on the forum.

And make sure you check out Episode 229 and Episode 230 of the V-LOG where we discuss the Hyperion and the Drones update.