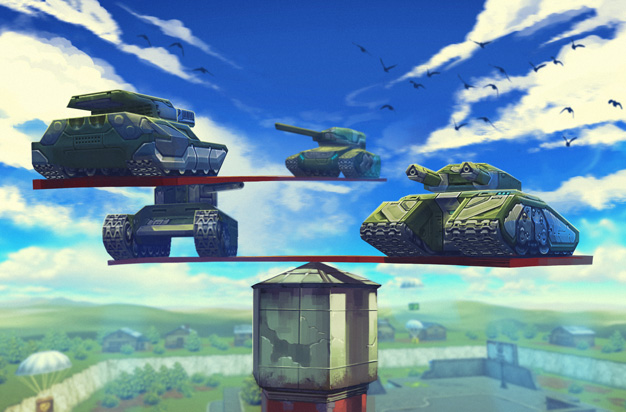 TL;DR: The latest update in Tanki Online brings about changes to Magnum, Shaft, Hammer, Striker, Isida and Thunder, as well as other balance fixes! Details below.

With the server restart at 02:00 UTC on January 25th (tomorrow), we’ll be implementing an important update that will include changes in the characteristics of some turrets and alterations, as well as some other balance fixes.

Slight decrease in reload time for all modifications except M0. Example: A fully-upgraded M3 will take 3 seconds to recharge instead of 3.5 seconds.

Reload time after sniper shots is 1 second faster for all modifications.

The “Uranium” alteration was found to be too strong. So now, when equipping this alteration, Striker reloads 10% slower. No other changes.

This turret has undergone several changes, not only in its standard parameters:

This has shifted the focus of Isida to make it more attack-focused, while the support function has become a secondary feature. However, repairing allies is still a viable option for earning points in battle.

The “Support Nanobots” alteration makes Isida more support-based for those who wish to play in this role.

Slight changes to the recently-popularized Sledgehammer Shells alteration. Maximum damage range penalty has been increased from 90% to 95%. This means you need to be even closer to the enemy to deal more damage.

Following multiple reports about a mismatch between in-game and wiki details about drones, this update will be correcting any erroneous information. The price and time for upgrades is now uniform across all drones. The total costs and times for fully-upgrading drones remain unchanged.

Change in the distribution of weekly mission rewards. Previously, completing all 3 tasks awarded 6 regular containers and 3 weekly ones. This has now been reversed — 6 weekly containers and 3 regular ones.

Reduced the length of the map to make it more balanced for mid-range players.

All the changes will be documented in detail on the Wiki in the coming days.

Make sure you enter the game tomorrow and check out all the changes for yourself. And don’t forget to give us your feedback!