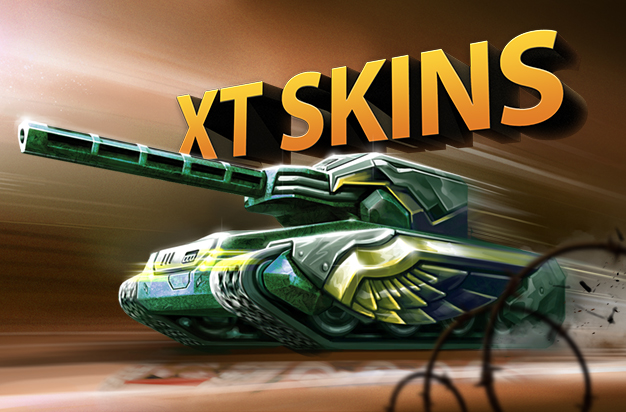 Many of you know or heard about XT-skins, and very soon you will see them yourself.

Tomorrow, June 7th, with an additional server restart 04:00 UTC XT-skins will be released on the game!

A skin is an optional appearance for your equipment. You will be able to equip them on appropriate turrets and hulls at any Rank, no matter the modification (M0-M3).

With this release we will add to the game only the conversion of XT-equipment into the new skins system, and later, we will also add new cool skins for all turrets and hulls.

What will happen to your XT gear?

With the update all existing XT turrets and hulls will no longer be separate items in the Garage, and will be split into standard equipment and skins.

MicroUpgrades from XT-gear will be transferred to the corresponding standard analogues the following way (for example we use Hornet XT, but the conversion is the same for all XTs):

And one more important question that’s on the mind of many players:

“If I have an unfinished XT mission, what will happen to it?”

In the mission rewards XT-item will turn into the skin. So if you complete the mission, you will get that XT-skin. If you don’t have the standard version of equipment for that skin yet, it won’t disappear, but will be added as appearance option when you gain the item.

IMPORTANT: new daily missions for XT-equipment no longer spawn since January 27th. Such missions remain in your current mission list only if you have received them before January 27th, but new XT-missions will not be added again.

Where and how to equip the skin?

You will find skins and can equip them in the first slot of your alterations for turrets or in a separate slot for hull alterations. Choose a turret or a hull, click on the slot in the item’s description, equip the skin and that’s it — you’re already looking mighty fine in it.

How to get skins?

From 04:00 UTC June 7th all XT-equipment will be removed from purchase in the Garage. Skins can be purchased only in the Shop or within the contents of a special offer. Special offer will appear in the Shop after server restart on June 7th and will include:

We will share more details about the availability of the offer at a later date.

IMPORTANT: if you already have one of the XT-skins from the special offer, the price of the offer will not change.

Also tomorrow, skins for Hornet and Railgun will be added* to the container items. The more you play, the higher is your chance to get them!

Please leave your comments and feedback on the coming update on the Forum!

*at the moment only Hornet and Railgun XT-skins for M3 gear will be added to containers.