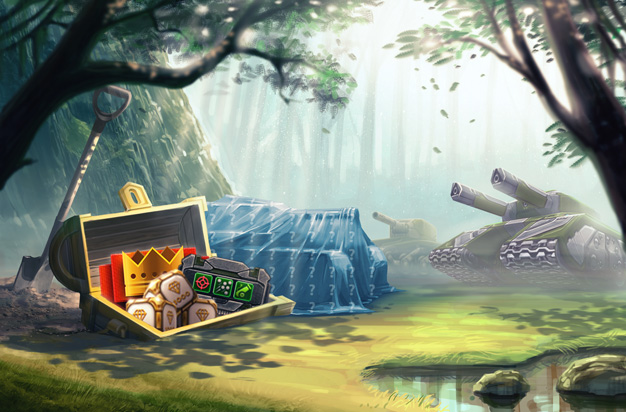 There’s a new crazy weekend giveaway coming today, and the prizes are cooler than ever. Destroy enemy tanks to win Gold Boxes, days of Premium, Griffon T-G protection modules and Dream Tanks—fully upgraded tanks with the best turret, hull, and protection module in the maximum available modification at your rank, even XT-gear.

And to make the weekend even more fun, all NON-PRO battles will have double funds!

Ready to win? Here’s how:

Just like in the last giveaway, you will have 48 HOURS to make the kill quota.

As usual, the different kill tiers will give you different rewards.

Players who meet the kill quota for the respective tier during the giveaway will be guaranteed** to receive the prizes listed above (gold boxes, premium and protection modules). Also, everyone who kills more than 800 tanks during the weekend will enter the giveaway to win one of the two Dream Tanks.

*Please make sure you read the terms and conditions as they contain very important information about the contest.

Additionally, we’ll be randomly choosing two tankers who have made more than 800 kills and who will receive a Dream Tank (chosen Turret, Hull and Protection Module available at their level, fully upgraded, including XT items).

The nicknames of the lucky winners will be announced on Tuesday, September 5th.

And finally, the cherry on the cake. All throughout the weekend, from 02:00 UTC on Saturday, September 2nd, till 02:00 UTC on Monday, September 4th, we’ll be having double battle funds in all non-PRO battles. That’s 100% extra funds for every battle you finish!

So, get ready to blow up tons of your enemies this weekend. Awesome prizes await!