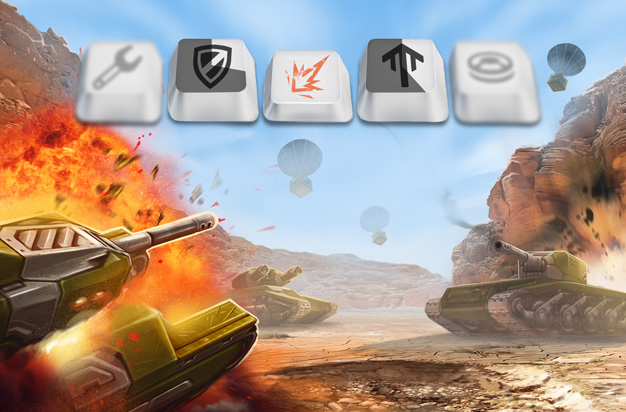 With tomorrow’s server restart at 02:00 UTC, we’ll finally be rolling out the first Overdrive as a permanent feature of the game, and making some changes to the active and cooldown times of supplies, as well as some fixes under the hood.

Here are the details.

You might remember the Overdrive feature (originally called “ZERO Supply”) that we first tested during the May 2017 holidays. By popular demand, Overdrive will now be coming back as a permanent feature of the game.

Just as in past events, before you can use Overdrive, you need to charge it up by performing actions (kills, flag captures etc) that will aid your team. Once your Overdrive is charged, unleashing it will activate all 5 supplies (except gold boxes) for you and any of your teammates nearby. The default key for Overdrive is «Shift», however, you’ll be able to change this in the Settings page.

Of course, PRO Battles will give you the option to enable or disable Overdrive, and in format battles (except Parkour), Overdrive will be disabled by default.

Changes to supplies and Repair Kits

Tomorrow’s update will bring changes to the Repair Kit and other supplies. Here’s how that will work.

The other supplies will also be undergoing changes to their active and cooldown durations. These changes are intended to balance out the effect of having Overdrive in the game, and will be based on the settings we tested during Tanki’s 8th birthday celebrations. You can check out the details in the official Patch Notes.

From tomorrow, the supplies panel will be sporting a redesigned look, and supplies will have brand new sound effects.

With this new interface, whenever any of your supplies have reloaded after a cooldown, you will be notified with a very prominent visual cue.

Also, every time you activate a supply, you will hear a sound effect. However, you won’t be the only one hearing it — players around you will ALSO hear it. Obviously, you’ll also be able to hear when other players activate their supplies, which means you’ll be able to use this as a strategic element.

Additionally, when your supply runs out, you’ll also be notified with a sound effect. However, this sound effect will only be audible to you, and not to other players.

The idea behind these sound effects, is to give you an auditory signal that will allow you to monitor your use of supplies, without having to look at the supplies bar all the time.

So, log in early tomorrow and start having fun with Overdrive, the new supplies interface, and all the other features that will be implemented in this update.

Of course, don’t forget to check out the official Patch Notes, and tell us what you think of this update in the forum.