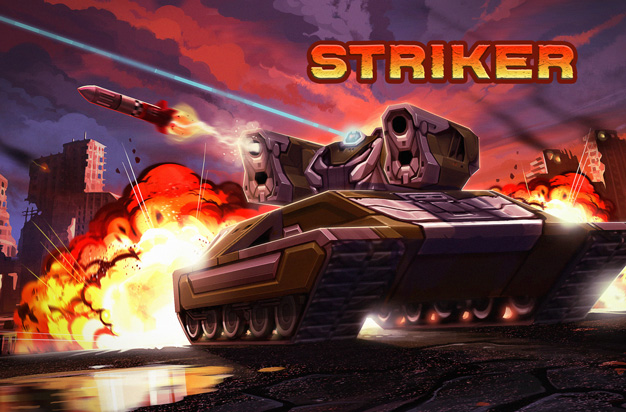 Great news! The next server restart at 02:00 tomorrow, Friday 23rd December, will be bringing you some highly anticipated releases.

The new missile launcher turret codenamed «Striker» will be joining the arsenal of available turrets tomorrow.

Striker has four barrels. Pressing the spacebar will fire a missile in a straight line from one of the barrels.

When holding down the spacebar, a laser beam similar to the one on Shaft, will appear. By pointing this laser beam towards an enemy, waiting for it to lock on, and releasing the spacebar, the missile launcher will fire four homing missiles that will try to find and destroy the targeted enemy.

These missiles can be avoided, especially by light hulls, but even if an enemy manages to avoid the shot, the missiles will still deal splash damage to any tank that is close enough to where they explode.

Of course, together with the new turret, we’ll also be releasing a set of protection modules with Striker protection.

In addition to the new turret, tomorrow’s release brings a new batch of 10 Alterations that will add even more variety to Tanki’s gameplay. Here’s what’s included in this batch:

Description: Deal more damage and burn targets within range. Cone angle can make it harder to hit targets on a different elevation

Description: Replace the refrigerating medium with a highly corrosive acid for extra damage. Freezing effect will be removed

Stats: Damage per second +10% | Freezing effect is off

Description: Greatly improved damage per shot. Reloading takes longer but damage is worth it.

Description: Horizontal aiming is faster, but at the expense of vertical aiming

As explained in episode 118 of the V-LOG, Alterations for Twins and Ricochet have not been included in this batch, as our devs are currently working on tweaking the damage mechanics in these two turrets.

Also, remember that these new alterations can be combined with those that were added in the first batch, which means there are now many more combinations you can use. So, if you’re using Hammer for example, you can choose to activate the «Slugger» Alteration, which improves Hammer’s accuracy, together with the «High Capacity Drum» Alteration.

And to conclude, we’ll also be rolling out the special in-game decorations for the festive season.

Additional details about this release can be found in the Patch Notes.

So, make sure you log into the game tomorrow and check out the new Striker turret, Alterations, and in-game decorations. And keep watching our homepage and social media, because there’s a lot more coming this week!

By the way, if you want a shot at winning a fully micro-upgraded Striker turret, as well as Protection Modules with Striker resistance, and Gold Boxes, check out the awesome Striker Giveaway we’ll be running during the last week of December!