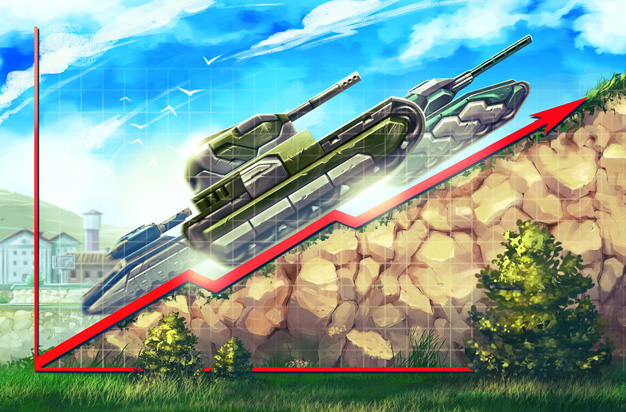 If anybody has ever doubted your claim that you’re the best tanker in the world, it’s time to prove them wrong. Personal Statistics, Ratings, and Achievements are now in the game!

In case you missed the details in yesterday’s announcement, here’s how each feature will work.

A crucial element of the new system is a weekly TOP-100 of tankers in 3 categories: experience earned, crystals earned, and gold boxes caught.

These lists are reset every Monday with the scheduled server restart, at 2 am UTC. The good news is that the ratings are in real time, updating every few minutes. So, if someone is close on your heels, you’ll be able to see it, and more importantly, do something about it!

Additionally, you can find out your current position in Earned Experience Points (EXP) and Earned Crystals (CRY) ratings without leaving the game. This data is displayed in the right part of your experience bar.

Each tanker now has his own profile page, displaying various statistics:

The bottom part of the profile page lists all the turrets, hulls and paints used by the tanker, including the amount of hours spent and experience earned using each piece of gear.

The system also displays the number of supplies used, as well as the time played and experience earned in each battle mode.

All profiles are publicly visible, which means you can view the profile of any tanker, whether he’s on your friends list or not. To do that, simply find his page using the search feature on the site, or by clicking on his name inside the game and selecting “Profile”.

Of course, you can also share your profile with the world through social media.

NOTE: The only parameters that have been monitored since the very launch of Tanki Online are experience points, kills, deaths, and crystals earned. All other numbers have only recently started being monitored.

So, to avoid any confusion, experience, kills, deaths, and crystals earned, are counted from the beginning of the game. Everything else has started being counted as of Friday, October 23, which is when the statistics system was integrated into the game.

Achievements are Tanki medals issued for reaching various milestones. There are nearly 150 of them, ranging from the most obvious, such as destroying enemies and capturing flags, to more unusual ones, such as collecting all XT items or getting a rare paint.

Your personal statistics and achievements, as well as the weekly ratings, can be viewed by clicking on the Ratings button in the upper panel of the homepage or forum.

It’s time for you to finally prove that you’re the best on the battlefield. Join a battle right now, start building up those statistics and ratings, and collecting achievements, and then rub them in your opponents’ faces! Victory is now twice as sweet.