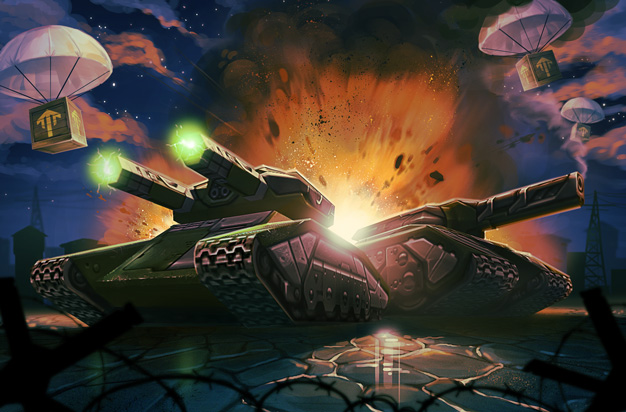 Today, we have slightly improved the armor of heavy and medium hulls. We’ve also changed the way Speed Boost works — now it increases not only the speed of the tank, but also the top speed of the turret’s rotation.

The speed of battle fund growth for lower ranks has also been increased.

Additionally, we have replaced the old Score Multiplier Pass with 3 new ones, and made changes to the system that ends battles with obvious outcome sooner.

Keep reading for detailed info on each change.

More HP for heavy and medium tanks
The game’s balance is shifted towards light hulls. More than half of the purchased hulls are Hornets. Only 5% of total game time is played on heavy hulls. Due to that, the game loses some of its diversity, and the gameplay doesn’t work as intended.

We’ve decided to balance things out by increasing the armor of heavy and medium hulls. The amount of extra HP depends on the hull’s model and its modification.

We’ll analyze how these changes affect the balance of hulls in Tanki, and continue to tweak parameters as needed.

The change will come in handy for battles with active supply use, where turrets often struggle to follow tanks on nitro. The updated Speed Boost also makes heavy hulls more competent in situations where they are being attacked from behind by enemy Freezes, or when light tanks drive circles around them.

More crystals at lower ranks
After the removal of crystal boxes, we analyzed the amount of crystals players get from drops, and increased battle funds accordingly. But this wasn’t quite enough. Newbies were getting less crystals. To return things to the way they should be, we have increased the speed of battle fund growth for lower ranks.

The change is primarily aimed at those who want to rank up faster, or get access to a specific weapon as soon as possible, for example, in time for a sale.

Updated system for earlier battle finish
We have changed the way the system for ending obvious battles sooner works. Now, it evaluates changes in the teams’ balance faster and more precisely, as it only evaluates the last several minutes of a battle, which are the ones that matter the most. Additionally, the earlier finish is now supported in PRO battles, where the feature can be enabled or disabled in the battle creation menu.

That’s all for now. Enter the game and try out all the changes yourselves. You can share your impressions in the forum as well as via a special poll. Good luck!