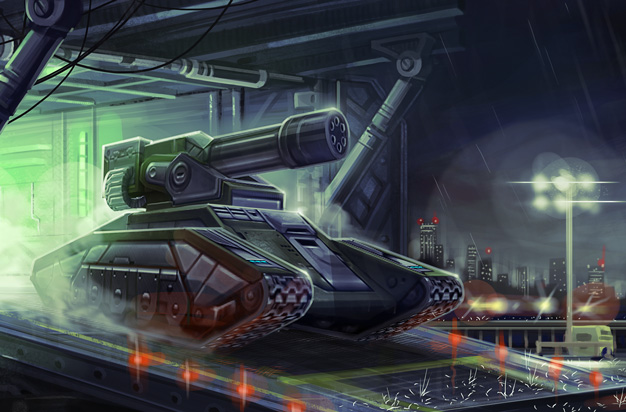 Today, we are happy to introduce the long-awaited Vulcan turret, as well as 13 new protective paints! We have also updated the model of Hammer and made several changes to the parameters of Firebird, Twins and Ricochet. Let’s look into this in detail.

New turret
Vulcan is a turret ideal for combat at medium and long ranges. It is capable of firing indefinitely. However, after shooting for a significant amount of time, it will start building up heat. This will cause your tank to suffer damage. The self-damage feature can be countered by equipping a paint with Firebird protection. Another unique feature of this new turret is its gyroscope. Once Vulcan’s barrels are rotating, it will be fixed in the direction it is firing. Knocking off its aim will be very challenging. This is the first gun that will let you control the hull while the turret is facing the desired direction.

New paints
We have added to the game, 13 new paints with Vulcan protection. Five of them also help in dealing with Hammer’s shots. Detailed descriptions of the new paints can be found below.

“Blacksmith”
Available from: Major
Price: 90 500 crystals
Protection:
25% against Vulcan, 20% against Shaft, 17% against Railgun

“Graffiti”
Available from: Generalissimo
Price: 250 000 crystals
Protection:
50% against Vulcan, 25% against Twins, 25% against Shaft

Updated looks for Hammer
We have updated the model of Hammer. The longer barrel reflects the turret’s parameters and accuracy better, while the reworked textures for all modifications helps Hammer fit the game’s visual style better.

Changes in parameters of turrets
The introduction of a new turret always leads to changes in the balance of other weapons. To keep all the turrets in the game competitive, we have made several changes to the parameters of Firebird, Ricochet and Twins.

Make sure you enter the game and try all the new things for yourselves. As always, you can share your impressions in the forum or via the poll.