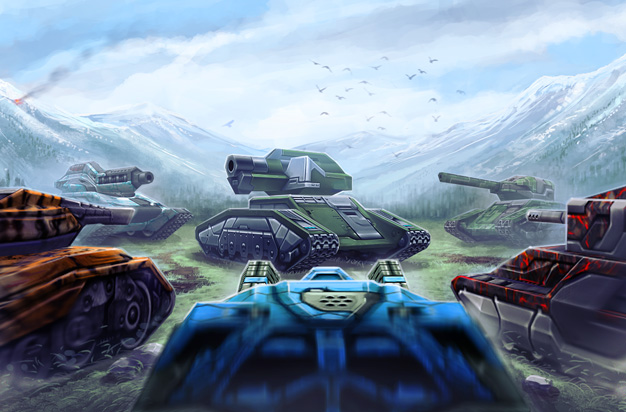 As of today, the game features the long-awaited paints with Hammer protection! We have added 7 all-new paints. You can find their detailed descriptions below.

“Tiger”
Available from: General
Price: 175 000 crystals
Protection:
40% against Hammer
30% against Smoky
15% against Railgun

“Nano”
Available from: Marshal
Price: 231 000 crystals
Protection:
30% against Hammer
28% against Ricochet
20% against Smoky
10% against Firebird

Protection against the shotgun turret has also been added to several existing paints. In their case, the Hammer protection is an additional one, so their prices, and the ranks at which they become available, have remained the same.

In the near future, we will also introduce paints offering protection from both Hammer and Vulcan. They will be added to the game with the release of the machine gun turret.

This same update has also brought a small but handy change to the game’s interface. If you access the lobby while in the middle a battle, you can choose whether to remain in the fight while visiting it, or leave the match altogether.

Finally, some maps have received additional drop zones for gold boxes. A while ago, we made the drop points for gold boxes less predictable on the most popular arenas. Now it’s time to extend this to all the remaining maps.

That’s all for now. Enter the game and check out how the new paints look on your battle machine. And make sure you share your impressions about them in the forum and via the poll!