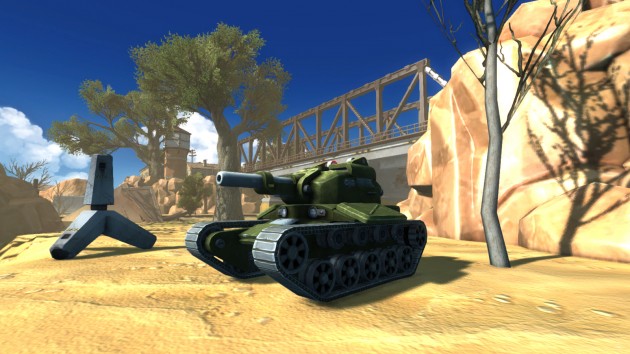 In one of our latest videos about the development of the new Tanki Online on Unity, we shared with you the creative process involved in designing and building objects such as bridges, tunnels and houses, to breathe life into the new world of Tanki.
Texturing is an important part of this procedure. A texture is a graphical image applied to a surface or an object. It allows you to distinguish between a sandy road and an asphalt one, or between stone and metal. We are currently in the process of creating terrain textures. The Terrain is what makes up the map’s landscape: sand, rocks, pavement, grass and so on.

There are different ways of creating textures. You can take a picture of a real object or material and apply it as a texture within the game. While this method creates a very realistic and intricately detailed model, games seldom require such level of minute detail. This can actually be counter-productive as it creates “extra noise” on the screen. The image becomes overburdened with detail, which in turn makes it too difficult to absorb and enjoy.
For the new Tanki Online we will be using hand-drawn textures, created by our team of talented artists. This approach allows them to be selective on the details, focusing on what brings a texture to life, and doing away with what is unnecessary, distracting or cumbersome. The end result is a map rich in graphics that are soft and harmonious — a world perceived as a single canvas, rather than a mess of objects and textures that clash with one other.
This does not mean that the new Tanki will be any less detailed. Quite the contrary. Unity will allow us to push the level of detail to a much higher level than it in the current incarnation of the game.

This hand-drawn sand texture is a perfect example.
While it is intricately detailed, displaying volume and texture, it retains clarity by not being overburdened by unnecessary detail.

Some people have the misconception that “hand-drawn” means “cartoonish”. While this is not necessarily the case, we deliberately distance ourselves from realistic graphics. We do not need hyper-realistic tanks and objects, as experience has shown us that it detracts from the gameplay and often prevents players from enjoying a game’s full potential. Of course, we are still committed towards bringing you a game that is nothing less than visually stunning.
Also, at a technical level, hand-painted textures generally require less resources. They are less demanding of your GPU, so the game will load faster and consume less cache memory and hard drive space.

As we develop the game on Unity, we will be adopting the engine’s standard technologies, such as normal mapping, as well as implementing our own in-house developments.
Normal mapping technology uses pixel shaders. Adding a normal map to a default texture creates a sense of volume and complexity. At the same time, the texture remains easy to perceive, without overloading the scene or making it overly detailed. The texture is flat, but the interplay of colour and lighting makes it appear more vibrant and dimensional, resulting in a completely different feel.

The pic below shows the difference between a default texture (lower image) and the same texture with added normal map (upper image).

The new Tanki will feature an array of complex materials such as metal, glass, reflecting surfaces, wood, bark and water, none of which exist within the current environments due to technical limitations. With Unity, the use of these complex materials will become possible, and we intent to take full advantage of that feature.
As opposed to the current incarnation of the game, the new Tanki will automatically adjust texture resolution to achieve balance between performance and visuals. Low performance devices will feature simpler materials and reduced complexity in glare and normal maps. The goal is to provide our players with a game that runs smoothly on as many devices and hardware combinations as possible.

Creating textures for terrains is essentially the last step in texture creation. The majority of these are ready, but as mentioned on our video, our artists may need to create additional textures in the process of developing new objects. Of course, let’s not forget the actual tanks. We’ll soon be telling you more about the making of fearsome battle machines for the new Tanki. Stay tuned!