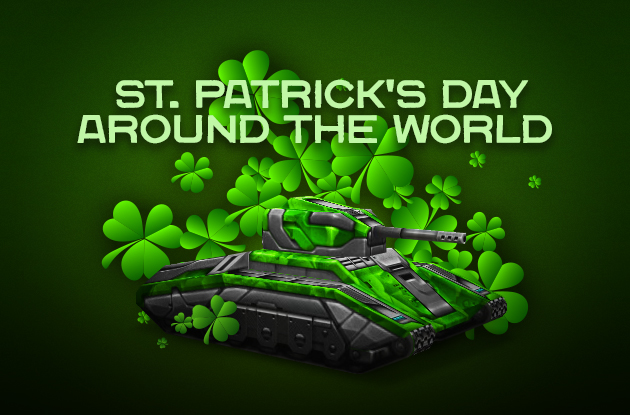 Many of us wait for that one day to wear excessive amounts of green, search for a Leprechaun, or eat a traditional Irish dish in celebration of “St. Patrick’s day.” Celebrated on the 17th of March, we look at how it was celebrated around the world via our fellow tankmen/tankwomen’s descriptions.

Interviewees chosen to represent their country were asked the following: What is it called in your country/native language? How is it celebrated? Why and who celebrates this holiday? Do you personally observe this holiday? If so, with whom?

“In Bulgaria we don’t celebrate it. I have never heard about it. But at school when we’re learning The English Language, our teacher told us about it. Now I will write you what is there in our workbook: On 17th March, people from Ireland wear Shamrock, cook traditional dishes, watch street theater performances.” — maykito representing Bulgaria.

“St. Patrick’s day in Canada is called St. Patrick’s day as we were formerly from the British/ Irish Empire. In Canada it is celebrated by parades throughout all the major cities in Canada. For instance here in Toronto, Ontario the parade we host on the Sunday (aka March 17 when St. Patricks day is) before St Patrick’s Day is celebrated in the downtown core which attracts large crowds with tens of thousands of people. Another way it is celebrated here is through sports teams such as The Toronto Maple Leafs (Biggest sports franchise in North America) wearing their retro Jersey’s from when they were the Toronto St. Patricks (1919-1927 we won so many Stanley Cups in that time…none now. The Toronto Raptors also wear their special green jersey’s.
I personally don’t observe this holiday that much but I do wear green just so people don’t ask where is your St. Patrick’s day spirit. Also I hate to be a party pooper.” — canadarules representing Canada.

“We called it frauenpower. But Germans didn’t celebrate it is mainly Irish that live in Germany that celebrate but there are parades and lots of beer and whiskey. I didn’t celebrate it as much cause I am full German. I celebrate it more now cause I live in America now. I even got a full green suit for a present from one of my friends for my first Saint Patty’s day in America”— jet-0 representing Germany.

“It is called St. Patrick दिवस or St. Patrick divasa in English. It is not a kind of festival or something in India. But it celebrated by Christians. Mostly in the Holy Church. Masses are held and it celebrated normally in the Church. This holiday is celebrated by Christians ONLY in India. Frankly, I really didn’t know a lot about this day till I was asked to answer these questions. I’ve heard a bit about this day in the Church. I don’t celebrate this day. You can say that I go to Church on this day ( if it a Friday )otherwise I don’t observe this day.” — samsondsouza representing India.

“In Ireland, St. Patricks day is popular because Patrick has brought Christianity to Ireland and that is why we celebrate him. He explained Christianity using a Shamrock saying that the 3 leaves on it are ‘The Father’, ‘The Son’ and the ‘Holy Spirit’ and that is why the Shamrock is associated with Ireland so much! That is a short summary on how Patrick introduced Christianity to Ireland. Patrick is also famous for banishing snakes from Ireland. There are huge parades going around the country on March 17th (St.Patricks Day). Most people enjoy these parades, especially the Pubs! When going into the parade you are influenced in wearing something green, as that is what you are supposed to wear. Some people get themselves covered with green, they wear green cloths, paint their face and dye their hair or some people just paint a Shamrock on their face. I usually try wearing everything as green as possible, I even paint my nails and wear an enormous hat. I go into the parade with my friends and family, we usually come 2 hours before the parade starts to get a decent place. After the parade has been finished, a large number of parents start visiting the Pubs.” — eduardos123 representing Ireland.

“St. Patrick’s Day… Hmm, it is called ‘Hari St. Patrick’ in Malay. Well, it is not widely recognised among Malaysians simply because most of Malaysia’s population are Muslims, including myself. Hehe, because of my poor knowledge about this holiday, I did some googling…  Apparently, it’s celebrated with parties, festivals and the wearing of green attire. I really don’t know why it is celebrated. People that celebrate it are Christian Indians and Chinese. Personally, I don’t observe this holiday since I’m a Muslim and due to the fact that it isn’t widely known here.” — tiger_of_malaysia representing Malaysia.

“It’s spelled the same here as well; St. Patrick’s day. There’s an Irish club Of The Netherlands who organize a festival this year, in Den Haag. It will consist of a series of Irish music, and sporting events. They celebrate the Irish culture and heritage with party favors and costumes. The trefoil is used a lot in these costumes. They go see each other in pubs as well… I had no idea there were Irish pubs here. In my Province, there’s no such an event organized, thus I’m not familiar with it. I don’t celebrate it… in other words, I sound like a boring person huh?” — splitterpoint representing Netherlands

“Hey, glad to help. To celebrate what we also call St.Patrick’s Day, usually, the Irish of New Zealand (or anyone whom wants to get involved), dress up in green/goofy clothing. They go around having a good time and making everyone happy by celebrating “luck” and the mythical joys of Ireland e.g. Leprechauns, unicorns, rainbows etc. It is a fun time to share happiness with each other and have fun. It is very common to see people on the main streets of the cities celebrating this holiday, they also gather in pubs since drinking beer is like an icon of Ireland. The key is GREEN. The holiday mostly revolves around the colour green.” — willkillu representing New Zealand.

“St. Patricks Day. Irish, nothing better to do and it’s a reason to get pissed. No (I do not celebrate it).” — EddyBeGood representing South Africa.

“Saint Patrick’s Day is technically not a government observed holiday in the United States, so things like schools and businesses stay open. However, it is certainly celebrated. Here, instead of celebrating the actual Saint Patrick, it is more of a celebration of Irish and American culture. Most people who care to celebrate the day in any way will wear green somewhere on them, while others completely go all out with hats, glasses, and shamrocks, just to name a few. There is some sort of parade in most places celebrating the Irish people and their culture. Most pubs and bars usually have some sort of special and you can usually find somewhere to get a good drink at a decent price (If you are of age, of course). I personally just celebrate it with my family by going to the local parade and having a good time. Sometimes my brother and sister try to catch a Leprechaun, but we still have yet to catch one…” — Fjelstad1678 representing United States.

A big thank you goes out to our participants!

If your country has been missed, please answer the questions and post them in the discussion topic. If you would like to correct someone above, please do it there as well.

Thanks for reading; hope you enjoyed and learned something.