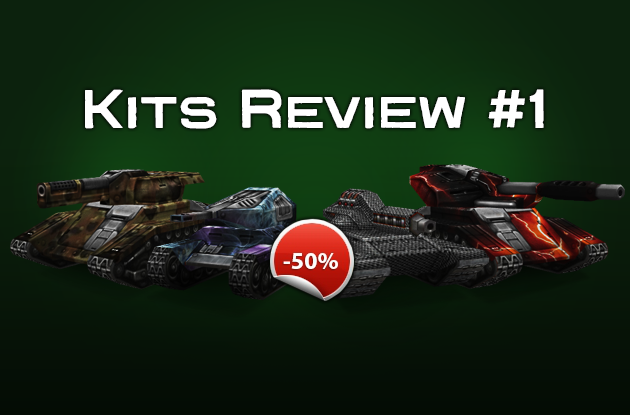 Author’s note: Hello, I am Raphael2. This is an article I wrote, as I am part of the Reporter’s team. In short, we used to publish a monthly set of exciting articles, guides, stories, interviews, contests and else. Now it’s finished, articles will be spread over the whole month, you’ll have a regular flow of articles. We’ve been writing for almost two years, so we already have written a solid foundation of articles and you can read some of our previous articles here.
Let’s get started with our first article on the main page!

Kits are several goods combined into one, costing less than if you bought the same goods separately. It often allows you to buy items that are not unlocked yet, and Kits are never discounted as they already cost less than usual. In this series we’ll analyze all the kits. This first episode will analyze the Starter Kit, Starter Kit XL, Turret Kit, Light tank Kit M1, the Paint Kit M1 and Heavy tank Kit M1.

The Starter kit is rather cheap; the 80% discount allows non-buyers to buy it if they save up crystals.
Titan and Wasp, plus the initial Hunter means that you have a hull of each kind – light, medium and heavy.
Wasp is the smoothest M0 tank, quick enough to disorient enemies.
You have a close range weapon, a medium range weapon and an unlimited range weapon.
Firebird M0 does a good job on Wasp, Twins works well on Titan M0 too, or with Hunter in the first Sandbox DM, and Rail is good with both, but I prefer it with Titan, in the popular Serpuhov or Highland CTF battles.
Swamp and Lead are not very useful as the protection is low and Shaft is not common since it is only unlocked at Master Corporal, but Carbon is a good paint, as most of the players use Smoky at the first ranks. Like its little brother, the Starter kit XL unlocks a wide range of hulls and weapons.
Hornet and Viking are very trustful, and Freeze, Rico and Thunder are also powerful. Storm is a good choice as Firebird is rather popular among newbies and as Firebird M1 is the first M1 to be unlocked.
Freeze/Hornet is great to circle around newbies, and Freeze M0 is very powerful, it kills the initial Hunter in milliseconds!
Thunder M0 is powerful enough to kill the popular Hunters, Wasps and Hornets in two shots, and Viking M0 is very stable and is ideal for Thunder.
I personally like Ricochet which should be unlocked at Sergeant, and with which I had great wins with and without using supplies.

The Starter kit unlocks stuff that is already available at the rank it is unlocked, while the Starter kit XL unlocks equipment that can’t be bought separately. Thus the XL kit is more powerful. Both kits allow you to enjoy the game with a great variety of combos, but as a buyer I would get the XL kit and as a crystals saver I would get the basic kit. I tried to compare two equivalents, but I’ve had the same score.
However, unless using supplies, Mammoth is so slow that you can fall asleep anytime. Titan is considerably better on that side.
Twins and Rico are comparable but I prefer Ricochet as it has a greater range.
Freeze is very fun to use, as well as Firebird, so it’s a draw on this board.
I prefer Wasp to Hornet as Hornet doesn’t drift much at M0, while Wasp already has it’s fast-braking capacities.
It’s very close about Thunder and Rail, I love both so it is just a matter of taste.
If you started an account to use supplies and dominate newbies, don’t bother buying the Supplies kit and using Hunter/Smoky – it would be cheaper to get both Starter kit and to have an almost-full garage with 90 supplies each. Although Hunter/Smoky isn’t bad either. One rank after Shaft M0 is unlocked, you can get it M1 through the Heavy Tank kit M1. It has an awesome power at this rank. You can kill everyone in one shot, except Mammoth M0, but this kit is so expensive that only buyers can get it and only a few people buy crystals at this rank, or if they do, this kit is so powerful that they get to the Warrant Officier ranks in minutes. That’s why you’ll almost never see another Titan M1 at the rank this kit unlocks.
Titan M1 is perfect for Shaft – about 200 health points after the first health micro-upgrade, with a good speed, and an amazing power which allows you to push enemies off the map when your reload is too long to kill them. The only little inconvenience is the stability when you are shot at by a Twins or Rico user, but it would be worse with any other M0 hull.

The paints protect you from one weapon, and you should pick up the right paint when entering a battle to make the most of them – if you enter a game and see three Freeze while you’re wearing Tundra, go back to your garage to pick up Python. The paints will last long, they will still be useful when you will be playing against M3s. Meanwhile, at Sergeant, Tundra might be the best choice – as a camper, you should be able to kill Freeze and Isida before they reach you. Railgun will be the only weapon that can easily hit you and believe me, a Railgun M0 shot when you have Titan M1, Tundra and a double armor hurts less than a Mosquito bite. So just protect yourself using mines to keep safe from short range weapons and start ruling the battlefield!
Here’s a little gameplay to show you this combo’s power – notice how the mine I put protected me from that drugging Freeze, and how easy it is to make double kills. This kit only unlocks M1 stuff one rank earlier, but still, almost no one has M1 equipment at these ranks.
Firebird/Wasp is one of the funniest combo to use in my opinion, and Firebird M1’s after burn is so powerful that to make the most of it, you just have to spray fire and run away, looking for another target while reloading. Wasp M1 is fast enough not to get shot when reaching your target, and when running away to reload. When using supplies, you don’t need to fire for more than one second – 1/4 of your bar – at light and medium hulls. Heavy hulls will require half your charge to be killed.

The paints are really good, Cedar will help you a lot as Thunder is deadly for a Wasp and very common after First Lieutenant. Spark looks way better in my opinion but Ricochet is not that common – it is unlocked at Sergeant and most of the newbies already wasted their crystals on other M0s like Twins or Firebird. Lava is obsolete compared to these two paints and won’t help you much when using Wasp.

To exemplify my game style, here’s a little game play. Ahh, this is the most overpowered kit ever in my opinion. Mainly because it unlocks Thunder M1, which is very close to Thunder M2, at Staff Sergeant, while it should be purchasable from WO4 only. With supplies you can kill all the medium hulls M0 and light hulls M1 in one shot, and even without supplies you can easily get a 5 D/L. Since Thunder reloads quite fast and Hornet is the most popular hull, you understand that it is a delight to play with it. It will still be effective until Brigadier!

However Thunder is not alone in this kit. Smoky, Thunder’s little brother, is pretty darn good too. While using supplies it finishes most of the enemies in two shots, and it reloads so rapidly and it has such a huge knock back on other hulls that they can barely strike back! Add that to the negligible loss of power depending due to distance, to the fast turning speed and to the lack of splash damage and you’ve a monster. Smoky.

Twins M1 comes along them too. Twins M0 already rules the battlefield at this rank, so imagine what Twins M1 can do. While drugging, you need 3-4 bullets to kill Hunters, Hornets and Wasps, and God knows how fast it reloads. There’s only one word for it: almighty.

Railgun M1, will be extremely fun to use. You can kill in one shot Wasps, Hornets, Dictators and Hunters. The last three hulls, Viking, Titan and Mammoth will be killed if they’re shot once or twice by a Smoky. While using supplies, you one-shoot everyone. You can use it with a light hull and do peek-a-boo tricks, killing enemies and getting back into cover. It can do pretty good too with medium hulls, and if you want to use supplies, you should get a heavy hull.
We already talked about Firebird M1 in the light tank kit M1 review.
To conclude, this kit is made for both buyers and savers. A buyer can get it straight at Staff Sergeant and dominate the battlefield, and the kit’s dominance will last until the end of the Warrant Officer ranks, when most of the players will start to gain skills and have similar M1 equipments. A saver can reasonably get it around Warrant Officier 2, and he’ll have enough weapons not to lack any. As said above, Tundra and Python will help you a lot even when you’ll have M3s. On the other hand, Dragon and Dirty will barely be of any use.

Let’s be honest – heavy tank and light tank M1 kits are made for buyers. You can’t save up 100k crystals for one combo only, which won’t dominate others when you’ll have the crystals but which will be average. It’s only there to allow buyers to have fun, and to have reliable paints for the future.
However, it is conceivable to save up for the Turret kit, and get it at the first WO ranks. Still, buyers can have a lot of fun with it, getting it at Staff Sergeant. It is a very good investment and allows you to have the best weapons until Captain.
The Paint kit M1 is weird. Buyers already get the paints in it in the other kits, and non-buyers will never be able to afford to spend 50k crystals for a few paints. I guess it’s interesting for WO5s or First Lieutenants who have already bought several weapons and tanks separately, but who need paints. As Python costs 50.5k, getting this kit is cheaper and gets you another good paint. Or for someone who really wants Python and Tundra but who can’t wait until Third Lt. and WO4 to buy it.

So, if you are not a buyer, the only thing here which should interest you is the Turret kit.
If you buy crystals, the Turret kit should also be your main priority – but if you have enough crystals to get a second kit, I suggest you to get the Heavy tank kit as you’ll have the adequate hull for using all your weapons, as well as Electra, a beautiful paint. The Light tank kit is really great and cheaper too, and Cedar is my preferred paint out of all the paints I presented; but you’ll have bought Firebird M1 twice. No big deal though.

I hope that you’ve enjoyed this detailed feedback on the M0 and M1 kits. Stay tuned, an article about M2 kits is coming!