As you may remember, Tanki Online came into the world from the prototype:

In the beginning, the camera was located at a sufficient distance from the surface, the graphics looked cool,texture resolution was sufficient for the amount downloaded by one. In the process of creating the game we came to the asset system, which  significantly saved a part in traffic economy but killed the lights (shadows). The same camera with each new setting, everything was coming nearer and nearer to the tank, it became evident that there was low resolution textures, as Ivan Zykov the Art Director of Tanki Online remembers,  he says by this time he was tearing his hair out, screaming “freaking pixels are the size of an icon, lets stop it!”. Also  Flash features imposed restrictions in everything.

Years passed … (two). There were early experiments with hardware support in Flash. In the euphoria we were full of enthusiasm and we made more sophisticated polygon tests and effects. The thought was to have all the artists  concentrate on Tanki 2.0, as we believed that was our stronghold! – Breathless with happiness, we made a lot of concepts, adjusted settings, defined our style, reinforced the art department and the 3D-artists set to work. Part of what the art department did you have seen. In fact, it made ​​a huge list of assets, models of tanks and guns, a garage, a number of effects,  level of graphics were written and much more. Photo-realistic it’s cool – the game can already be compared with the notorious WoT, even during international conferences we get comments like WOW!

Realistic Tanki Online 2.0 turned into a simulator. The movement speed, size and proportions, physics and parkour – it was subordinated to realism, so much that it died. Irrelevant to the gaming process questions started popping up like; why can’t I pass through the tree, why can’t I shoot through the window, why can’t I crush tanks and why is it that I fell from the 10th floor and nothing happened?
Graphics complicated gameplay and the perception of the game. A huge number of details and lots of questions. The simplicity and nativity of the  game, that we treasured so much in the Tanki Online 1.0 disappeared.
As the art director Ivan Zykov expresses how he feels, he says “I can’t think about it calmly,  so much beauty going to waste!” What a loss. To be hornets, the photorealism in Tanki Online 2.0 would have killed the game.

We adjusted the style, making it easier in perception. Simpler shapes of objects and clearer physics of  interaction. Lighter, softer with a bit more of the sun and positiveness. Tanks, as well as other functional objects now have expressive features and all the “junk” removed from them.
The restyling of  Tanki Online 1.0 textures is coming to an end. 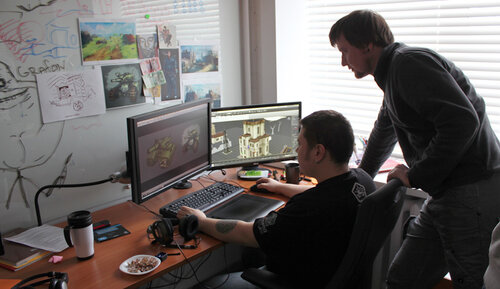 The style can be adjusted by the player according to his mood, and there is confidence accompanied by some figures showing that we are moving in the right direction. Drawing style has removed the sense of  pixels, reduced the amount of textures. 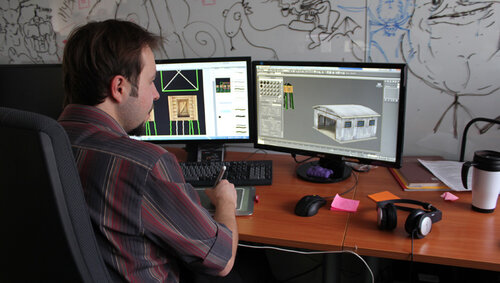 The new style, as well as simplification of perception in general, is perfect for mobile devices as demonstrated in the video.

Well the main thing is: the graphics will be developed for the benefit of people who have computers with GPU, and mobile devices which are able to support Tanki Online. We have great achievements in the visual part and they will be gradually introduced. What matters is what the majority of players are able to digest.