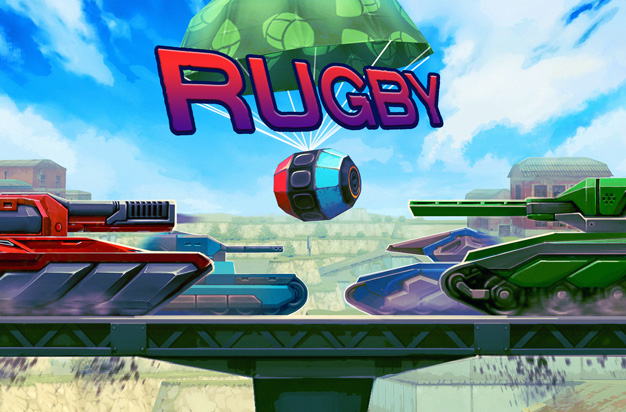 With the server restart tomorrow, 02:00 UTC January 27th Rugby mode will be finally released in the game!

In Rugby battles each map has two bases — Red and Blue — and several drop zones for the ball. The ball will be dropped in one of these zones, chosen randomly, and it will have a parachute, similar to supply drops. The goal for each team is to pick up the ball and deliver it to the enemy base.

The coolest feature of the mode is the ability to pass the ball to another player. If you press the F key (or the key you bind to dropping the flag), the ball will shoot in the direction your turret is currently facing, and it will bounce from any obstacles. This way, you can pass the ball over a low obstacle or an enemy tank.

If you see an enemy running away with the ball, you absolutely should destroy them, as you will be able to pick up the ball and begin your own attack.

Rugby mode will be available only in regular, non-PRO battles. A new button will be added to the Lobby, which will join you to a new Rugby match, and Battle List will also receive a new filter button for Rugby mode. Battles in Rugby mode will have a short name RGB. In PRO battles the new mode will appear at a later date — after we add the new updated maps to PRO battles.

With the release of Rugby mode new missions will be added to the pool of daily missions, and new missions will have the same goal “Earn experience” or “Earn crystals” as missions for other modes, but now they will include Assault and Rugby.

Also, as previously announced new super missions “Destroy 9999 enemies” and “Earn 99999 experience in battles” will be disabled with the release of Rugby mode on January 27th.

NOTE: Remember, if you already have a super mission, it will stay on your account until XT-skins are released. Only new super missions will be disabled 02:00 UTC January 27th.

Play Rugby mode after server restart tomorrow, share your thoughts on the new mode in this thread and good luck on the field, tankers!

Is it possible to catch the ball while it’s in the air?
Yes.

What happens to the ball, if the player who has it gets destroyed?
The ball will drop on the ground in the same place.

What happens to the ball, if nobody is picking it up?
If it arrived on a parachute to a drop zone and nobody has picked it up yet, it will remain in place indefinitely. If it was dropped by a player or from a pass, after a time it will disappear.

Why is the ball exploding?
It is the effect for when the ball disappears. The explosion doesn’t apply damage to anyone, it’s only a visual effect.

What happens when the ball is stuck in a place nobody can reach?
After some time, it will disappear and respawn at a drop zone.

Can I score a goal by passing the ball through the capture point at the enemy base?
No, you need to deliver the ball as a tank, like flag in CTF.

The ball flew straight through the wall! 😮
Do not panic, this is a bug, please make a screenshot where it happened.

Can the indicators for the ball drop zones on the map be disabled?
No, and “Show Gold Drop Zones” option in settings will not apply to Rugby battles.