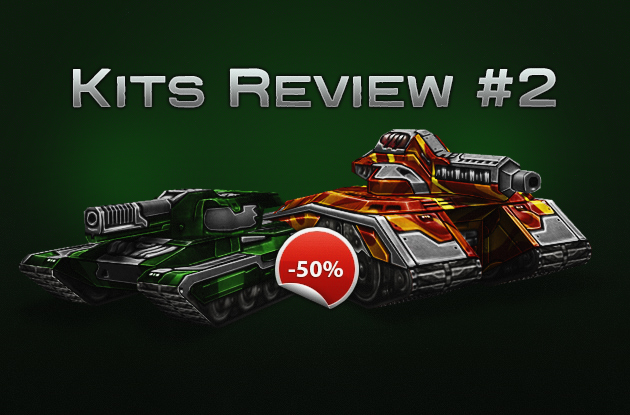 Kits are several goods combined into one, costing less than if you bought the same goods separately. It often allows you to buy items that are not unlocked yet, and Kits are never discounted as they already cost less than usual. In this series we’ll analyze all the kits. Last month, we reviewed the M1 kits. This second episode will analyze the Medium Tank M2 Kit, Heavy Tank M2 Kit, Hull Kit, Paint Kit M2.

This kit contains some of the best paints and of the best M2 equipment in the game. It is really cheap too, and allows you to buy Prodigi at First Lieutenant instead of Marshal. Once you buy this kit, you’ll never have to worry about paints again.
Viking M2 is utterly amazing, as its stats are really close to the M3 stats.
Thunder M2 is very similar to Thunder M3 too,
All this makes Viking / Thunder / Emerald an amazing combo, Viking is a very versatile tank. It can perform well in any map as it is a medium hull, with a good speed and a decent health. It suits Thunder perfectly as Thunder has a good range and doesn’t need direct contact, thanks to the splash damage. If you buy it at First Lieutenant, you’ll mainly face Hornets and Vikings M1, and some Hornets M2. They won’t be much of a problem as Thunder M2 can kill them in 1 – 2 shots while using supplies or up to 4 shots when not using supplies. The only thing you need to be careful about is self-damage. Just be careful and don’t get too close to your opponents, use splash damage at your advantage!
Prodigi (46% Railgun, 22% Thunder, 15% Shaft, 5% Firebird) is an awesome paint – amazing protection against Railgun, good protection against Thunder and a bonus Shaft protection. Railgun M1 and M2 starts to be popular at Lieutenant ranks – they are not annoying with Prodigi.
Emerald (42% Thunder, 26% Twins, 10% Railgun) is more suitable for DMs as Thunder is more popular in it; and even if Twins is very uncommon now, the good protection against it obviously helps a lot when you face a Twins user. The low protection against Railgun is the little bonus that makes the difference between life and death.
Sandstone (20% Railgun, 15% Shaft, 14% Thunder, 5% Twins) is just useless as both Emerald and Prodigi have higher protections.
I’ve got a gameplay video for you guys, to show you how powerful Thunder is, how helpful Emerald is (notice that the Railgun protection made a great difference), how versatile Viking is.

Mammoth is a true fortress. When you unlock it at Second Lieutenant, you have about two or three times more health than most of your opponents! That, combined with the powerful Ricochet and Inferno, is nearly almighty.
Ricochet needs 4 or 5 plasma balls to kill most of your enemies. It has a great knock-back which slows down your enemies and messes up their aim, allowing you to survive longer. It is more suitable for DM battles as Mammoth is very slow and there are quite a lot of Freeze users at this rank, making Inferno helpful. In DMs you don’t have to move much, you just have to kill and to come through your duels. Mammoth’s health allows you to survive longer and thus to kill more enemies.
It can be good to use this kit in Control Point battles, even if they are rare, Mammoth/Ricochet can just sit on a point and defend it. In Capture The Flag battles, it can perform well at defending your flag or staying midfield.
Inferno (40% Freeze, 30% Firebird, 12% Twins) is definitely awesome. DMs are often filled with Freezes, and usually they team up on you, but they don’t understand that once someone wears Inferno, they can’t do anything to him except slowing him down, which is not a big deal as you don’t have to move much in DMs. Really, Inferno makes Freezes pathetic.
Urban (40% Twins, 20% Isida, 5% Ricochet and Firebird) is not very useful. Twins is not popular, and Isidas usually don’t join DMs. In team battles you usually have enough time to kill them before they reach you. And IF they do, the protection allows you to kill them easily
Spark (33% Ricochet, 15% Firebird, 10% Twins) is also useless. Ricochet is not popular, but if one day you meet someone with the same kit as you, you’ll always win against him with Spark. The Twins and Firebird protections are small but can make the difference. Most importantly, Spark is very handsome.
Here is a gameplay video showing how Ricochet can dominate DM battles.

I already talked about Viking and Mammoth. Both are amazing hulls, Viking being more versatile and Mammoth being the ultimate DM tank.
Hornet and Hunter are lighter tanks.
Hornet is awesome, it has excellent speed while being very stable. The health is good enough to capture enemy flags without being killed and Hornet can do well in DMs too, as long as you use its speed to run away from short range weapons and heavy hulls.
Hunter is not quite a light hull but not a true medium hull. It is right between the two, for those who can’t decide between Viking and Hornet. It is very underestimated, while having truly great potential. It is probably unpopular because it shouldn’t be used like Viking – the extra speed should be used and you should keep moving with it.
Overall, the Hull kit gives enough hulls to cover any situations and play-styles, and it allows you to focus on weapons until at least Major General.

Prodigi and Spark have already been covered in Medium Tank M2 and Heavy tank M2 parts of the article. Prodigi is an excellent paint; Spark is beautiful but rather useless unless you play with Ricochets.
Rustle (32% Thunder, 20% Freeze, 10% Isida) is a great paint, especially after a few MUs. It provides you with good protection against Thunder and gives a chance to survive those famous from-behind attacks by Freezes.

Which is the best kit? Is it worth it to save up for M2 kits? Which one should you buy? Should you get several kits?

The medium tank M2 kit seems to be the best kit. But it is also the most expensive of them all.
If you start saving up once you’ve got an M1 combo, you can get this kit around Captain or Major, and you’ll still be way better than your rank-mates. Viking/Thunder will be a long-lasting combo, and you’ll have all your time to focus on M3s or some more M2s.
The heavy tank M2 kit is cheaper, but Mammoth is less versatile and Ricochet is hard to handle for most players. You should buy it only if you feel like you are fond of Ricochet, as Mammoth can be bought earlier and cheaper in the Hull kit.
The hull kit is very interesting. At WO5 you can get amazing M2 hulls while your rank-mates are happy with their M1s! It covers all the situations and, most importantly, it is cheap. Yes, cheap, 200k crystals for 4 M2 hulls are nothing – and you can save even more if you didn’t buy the M1s and M0s. If you are not a buyer, you can decide to save up for it and you should be able to afford it around Second Lieutenant. Then, you’ll be safe about hulls and you’ll have plenty of time to focus on M2 weapons.
The paint kit is not so tempting to get. It costs 200k too, but only for three paints, which will affect your gameplay less than hulls or weapons. So, it is pretty much pointless to buy if you’ve bought the medium tank M2 kit, or if you only have M1s. However, if you are a confirmed Lieutenant Colonel with enough M2s, and you only need great paints, this kit is what you’re looking for. It costs about the same as Prodigi alone, and gives you 150 supplies each; as well as Rustle which is another great paint.
Overall, I’d say that if you are a young WO with a few M1s, you should totally start saving up for the hull kit or medium tank M2 kit, or even both.
If you already have a great M2 garage, and have enough time before the M3s you want, go for the paint kit.
If you already have M2 weapons but can’t choose a hull to buy, the hull kit is made for you.
If you are a Ricochet fan, and feel like you can handle Mammoth’s slowness, then you should like the heavy tank kit M2.
Everything is a matter of tastes. Do what you prefer, don’t buy things because “your friend told you it was soooo good”. This way you’ll always be satisfied.

I hope that you’ve enjoyed this review on the M2 kits. Stay tuned, an article about M3 Kits is coming!