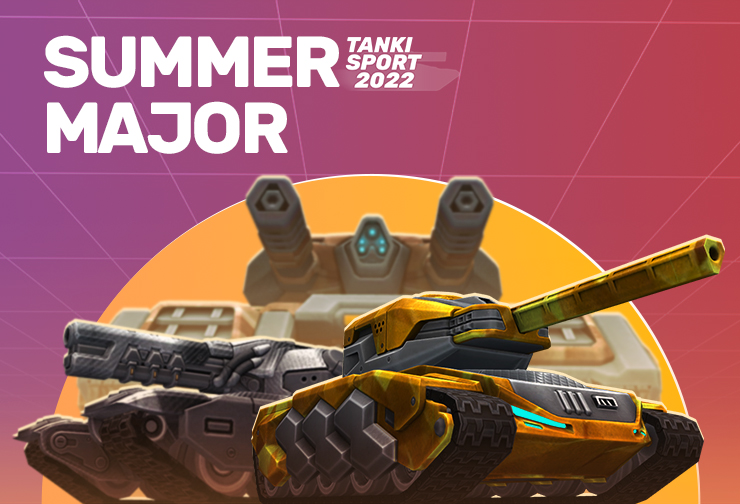 It’s finally the time for the long-awaited «Summer Major 2022» tournament!

Don’t take part in eSports? Well, that’s a pity, but don’t worry, we have a lot of interesting things for you too!

Our eSports players have come a long way during the last 6 months; they’ve played more than a hundred matches to earn rating points and get a place in the main tournament of the season.

Why the Major is cool

There’s plenty at stake! A real cash prize totalling 380,000 Russian rubles, unique prize paints, and modules with 20% to 30% protection against everything!

The winning team will receive 200,000 Russian rubles, hundreds of Containers, thousands of Tankoins, and millions of crystals!

This hasn’t happened in Tanki for a long time!

Why everyone should watch the Major

The top 24 teams will compete against each other in 3 stages: Challengers, Legends, and Champions. Each stage will bring something new not only for the teams but also for viewers!

The 16 lowest rated teams out of the total 24 will take part in this stage. The best 8 have already received a place in the next stage.

We will try to broadcast as many matches as possible. On each livestream, at some random point we will show you a promo code for 1 Ultra Container which can be activated by every viewer!

Don’t wait before activating the promo codes though, as they expire right after the livestream ends.

The Legends stage consists of the 8 highest rated teams who bypassed the Challengers stage, as well as the 8 best teams from the Challengers Stage. These 16 teams will compete for a spot in the Champions Stage using the same system as in the last stage.

In addition to the Promocodes, on each live stream, right before the Legends stage, we will announce the «eSports Tanki Fund».

It works in the same way as the regular Tanki Fund, with one exception: 10% of the fund will be divided between the 8 teams that have reached the Champions Stage.

Now we get to the final stage – only the 8 best teams remain, competing for the grand prize. This means there are just 8 matches left to determine the winner of the tournament.

The quarter finals, semi finals and grand finals — just 3 steps for a potential winner to prove that they are the best team!

The hottest matches and the fate of the cash prize!

Anyone who has seen at least one Grand Finals livestream before knows that you definitely shouldn’t miss it!

Don’t miss the livestreams of our eSports matches. During the Challengers stage, they will take place on our YouTube channel, and later we will move to our brand new Twitch channels! Root for your favourite teams, watch interesting matches, and get yourself some cool rewards!

Discuss in the forum
News
Secret party is coming back!
Tanki Online V-LOG: Episode 345
Ultra Weekend June 24th – 26th
Tanki Fund Giveaway
Scorpion. Early access.
All news
©2010-2022 Alternativa Game Ltd. All rights reserved. Published by APL Publishing Ltd.
Search
Announcement type: All Events Videos News
Request to customer service
You don't have an email address linked to your account. You will need to have it linked in order to send a request to our customer support service.