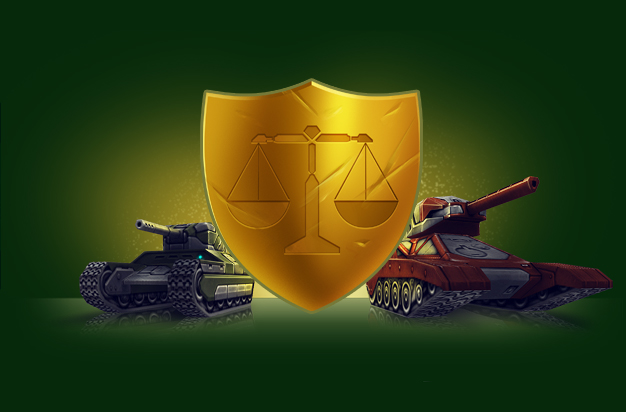 Today we’ve rolled out a number of changes to the parameters of turrets and hulls, reworked the Forest and Sandbox maps and added supply bonuses for beginners. Additionally, we’ve decreased the time restriction for changing equipment in battle, from 15 minutes to 1 minute. More information on each change can be found below.

Changes in the parameters of turrets and hulls
Hammer and Vulcan have now been in the game for some time. Now, we finally have all the data we need to properly analyze the current balance of the game. Players have learned how to use these turrets effectively, so they have become more dangerous than originally intended.

As a result, we decided to slightly increase Vulcan’s self-damage and Hammer’s cone of pellets. These are not the main changes, as the balance has been corrected by strengthening all the other turrets. Detailed descriptions of each turret’s changes can be found below.

All medium and heavy hulls have received a boost to steering, making them easier to maneuver. Additionally, Viking and Hunter have swapped weight. Viking is now heavier than Hunter. More information on the changes is below.

By the way, for all the techies out there, we’ve prepared a super-detailed spreadsheet with all the changes. It can be found here.

Reworked Forest and Sandbox
The game now features a reworked version of the Forest map — the one you could see in Star Series livestreams. Also, based on the communities’ feedback, we have reworked the drop zones on Sandbox.

Supply bonuses for beginners
Now, when a player unlocks a supply, he receives 10 pieces of that supply to practice with, as well as a brief explanation on how to use it in battle.

Improved system for changing equipment in battle
It’s now possible to change one’s turret, hull or paint while in battle, every minute. This is 15 times as often, compared to the previous limit. Now tankers can quickly respond to changes in the character of a fight, while players with several turrets or hulls in their garages will get the chance to use them all, even during one short round.

That’s all for now. Enter Tanki Online and play on updated maps with updated equipment. Also, make sure you give us your feedback, in the forum as well as via this special poll.

Good luck on the battlefield!