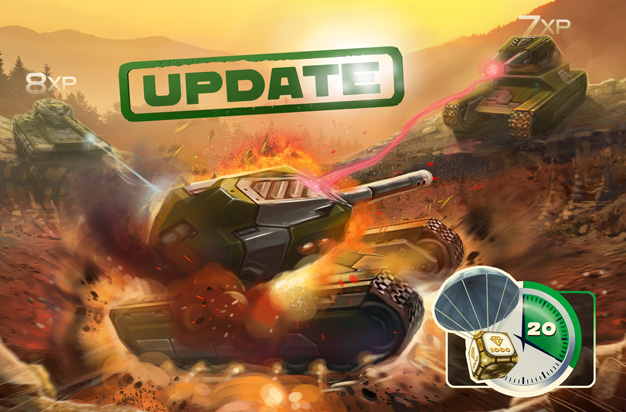 Over the past week, you have been actively taking part in an experiment. This is the first time you’ve been able to determine the future of Tanki to such an extent. Thanks to you, we’ve made the final decision: crystals will no longer drop in battles. Of course, there is always room for improvement. Largely based on your opinions and suggestions, we have just rolled out a whole bunch of updates. Let’s have a closer look at each of them!

Changes in battle fund distribution
After the decision to send crystals directly to the battle fund, some tankers started finding it harder to earn crystals. These were usually players who finished low on the scoreboard, or joined a battle too late to earn anything, or couldn’t finish the battle for some reason. To fix the situation, we have rolled out 3 changes:

Updated gold box mechanism
During the experiment, many players weren’t getting the opportunity to catch the gold, since they were either respawning, or simply too far away from the gold box zone during the notification. To give everyone a fair shot at catching the gold box, it now drops 20 seconds after the notification. There are also more drop locations, including zones near flags. For now, new drop zones have been added to a selection of maps, but this will soon be extended to every arena.

More customization in PRO battles
You can now disable Smart Cooldowns in PRO battles. Whether you like the tactical approach of Smart Cooldowns, or prefer fast-paced battles with all supplies activated, you now have the option to choose. We’ve also increased time, kill and flag limits up to 999. This is a great chance to got a mountain of crystals after a several hours of intense combat.

Small but nice things
Following your feedback, Isida’s visual effect is now closer to the visual style of other turrets. Also, the Settings section now allows you to choose whether or not to display drop zone markings.

We hope these updates will help bring the game closer to what you wish it to be. We’ll do our best to keep acting on your feedback. Now jump right into the game and experience the changes for yourself. And remember to leave your feedback in the forum to help us decide on the way forward.