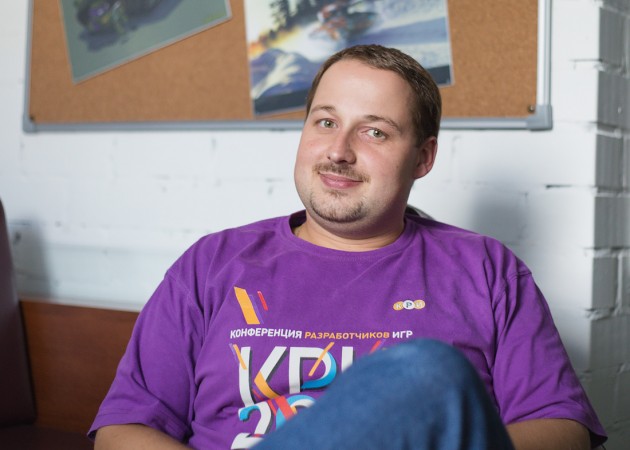 Introducing Roman Epishin – Chief Marketing Officer, Tanki Online
“In 5 years time, the F2P market will be as big as the Taj Mahal; and just as beautiful!”

Some of our Tanki Online developers have become familiar faces to you. You see them in weekly V-LOGS, and we post their photos on Twitter, Instagram and Facebook. But that doesn’t tell you much about a person does it?

Well, it’s time to really get to know these people up close and personal. After all, these are the people whose work brings you hours of fun and entertainment! So we’re launching a series of exclusive, insider interviews with TO employees. This first one is with our Chief Marketing Officer Roman Epishin. This guy is so busy, we had to strap him in a chair for the length of the interview. But it was worth it!

Please introduce yourself. What is your job at Tanki Online?
Hi. I’m Roman Epishin, Chief Marketing Officer of Tanki Online and AlternativaPlatform.

How did you get started in the games industry?
It all began back when I was a kid. I realized how amazing games were and naturally started playing constantly like a maniac! I even had some issues with my parents in my teenage years, mainly between the ages of 13-14. They thought I played too much! And they were actually quite right considering I was into some pretty intense real-time strategy stuff back then (Total Annihilation and Earth 2150 later on). Also good first-person shooters were a passion (viva Half-Life!). I used to play all day long from 9am till 7pm without any pauses. Gaming had got under my skin and into my blood. I decided I needed to do something creative and connected with the games industry professionally to be happy in life. In my first year at college, I started as a freelance reviewer for the small and now long dead web portal. This first trial led me to a full scale career in games journalism. For eight wonderful years I was playing on PC, PS2, PS3, Xbox 360 and Wii getting fairly decent money for sharing my impressions of games in major Russian language magazines and web-portals.

Eight years is a rather long time though and eventually I found myself really thirsty for some completely new experiences. So I changed sides and began to market games instead of writing reviews. How did you get started at Tanki Online?
When I made the decision to change from press to game promotion, the path that led to Tanki Online turned out to be very short. AlternativaPlatform was the closest company to me with their HQ in my hometown, so they were naturally my primary and number one potential job target. It was 2010 and the studio had still been experimenting with Tanki’s balance and graphics, (though the project was already 1 year old). The company founders, (my current colleagues) interviewed me and we just seemed to click. It was a very warm experience and they offered me the job! It turned out to be quite an easy step to take for me and looking back, I definitely feel as if it has been one of the key decisions in my life so far!

What makes Tanki Online unique?
Communications. Accessibility. High dynamics and deep tactical balance; it’s easy to learn, but hard to master. Of course, you may say there is nothing new in this statement, but I would argue that proportions really matter. When you can launch the game on almost any laptop, (even without a mouse!), from wherever you are, to get into a long or even short session of ultimate tank fighting happening with other players from all over the world, it makes total sense! You don’t waste your time on NPC chatting and AI mobs grinding. Right from the first minute, you are with others playing in teams or in brutal deathmatches. That’s why we mark communications as a basis for our project. We don’t just entertain our players, we help people communicate with others with whom they have common interests through entertaining activity!

What do you think the F2P-market will look like in 5 years?
It’ll be as big as the Taj Mahal; and just as beautiful! The trend is obvious. Look at the major game publishers who are usually considered as late adopters of any innovation. Today they’re putting more effort than ever before into developing F2P MMO’s. F2P is evolving and moving into more of a freemium model where you can play free, buy specific content, or pay a subscription to get even more amazing content as a part of a subscription program. The other trend is for true cross-platform experiences with a mobile component. In a year or two, you’ll be playing Tanki Online on your iPad in Berlin against the guy playing it on a PC in Sao Paulo!

Can you offer any advice for Gamers who want to establish themselves in the games industry?
Well, I think the romantic times are passing. Not so long ago, you could be just fascinated with games and that was enough to find your place under the gamedev sun.
Today, you need education as well as passion. Luckily, there already are educational programs out there so I would suggest the following steps: