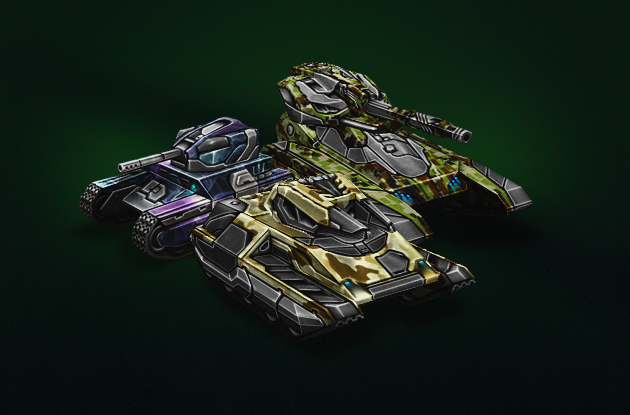 As the last paint review was for the most luxurious and time demanding of paints, here’s one for more of you to take into consideration in the present! The paints here will be priced around 80,000 crystals. Approximately, of course! Read and enjoy.

As Spark is one of the more aesthetically pleasing paints in the game, it goes to show that beauty is not only skin deep! For 79,500 crystals, Spark is an aptly priced paint for its medium-effective characteristics. It subtracts the damage dealt by one shot from Twins for every ten shots, and a third of the blow from every bullet of a Ricochet. The Firebird resistance has its advantages as well, though it’s not all that noticeable.

Spark is a paint for the transient tanker, who has a tendency for close range combat, and does not plan on keeping it as a permanent paint for very long, as there are many paints that are more apt for close quarter combat in the contiguous price ranges above 100K crystals. The relatively high Ricochet protection is unfair for its prerequisite rank of Captain, as Ricochets are relatively rare in the battlefields until around the rank of Brigadier. However, if one is really intent on buying this paint (I’d imagine for its visual qualities more than anything else), a medium heavy hull, such a Titan would be one’s best choice to go with, or even the speedier Dictator, and perhaps even Mammoth, though Freezes will be quite a pain with such a cumbersome hull. Weapons should be medium-to-close range, such as Twins, Ricochet, and Firebird. Lacking any Freeze resistance makes this paint not ideal for most medium-to-close quarter circumstances!

Digital was the best paint in Tanki Online, before the rebalance, before the graphic alterations, and even before the Tier 2 weapons were introduced so many years ago. Through it all, this antique paint has kept its characteristic resistance against Smoky and Railgun (previously called “Fear Machine,” just an FYI), in high quantities. 35% protection against an M3 Railgun can save a tanker nearly 60 health points! This protection complex is a good purchase at 79,500 crystals total, as it will be very useful for the rest of your tank career – you’ll always be seeing a few Railguns no matter your rank, and you are going to hate them no matter what, so you might as well have a paint that helps with that!

It’s no guess that digital was made to benefit the long-to-medium range offensive players, as all of its special protection is based against weapons of like range. Good weapons that would take advantage of this paint’s well-rounded statistics would be Thunder, Smoky, Railgun, or Shaft – any weapon that is effective at a long range. Any hulls could be complimented nicely (and effectively!) with Digital paint on board. There is an ideally inverse ratio between the weight of the tank and the amount of moving one would have to do. The lighter, faster moving tanks such as Wasp and Hornet could be put to good use with any of the weapons above, provided players move around some, ducking behind cover when an enemy Shaft or Railgun takes aim, to conserve your low energy levels! Behemoths such as Titan or Mammoth needn’t move as much or as often, as they can sustain beatings for enough time as it would take to knock out an enemy sniper, from a distance. In Deatchmatch or Control Points mode, staying around the perimeter of maps would be the smartest occupation. Just don’t charge for the flag or stay around one spot to get crystal drops — Firebirds, Freezes, and Twins will be your end.

This paint used to be one of the most effective against Freeze a few years back; I’m not sure why it’s been changed. I suppose it just ‘fits in’ better with all the other paints in the Garage after all these rebalances!

This paint is no doubt the most advantageous of the ‘100K-minus’ coats that offer protection from four weapons. However, do not let its Twins protection trick you into thinking you can go into a close range battle whenever you have the urge to! Five percent is tiny, and your tank will be melted before you can notice the difference it’s making.

Ignoring the first statistic, take note of the three substantial resistances this paint possesses: Railgun, Thunder, and Shaft, all around 17%. All the mentioned weapons are best used at medium to long range firefights, and perhaps a tad closer for Thunder. To get the most out of your 82,500 spent crystals, this paint should be used at medium distances, with sturdy, strong, and semi-mobile hulls, and weapons that inflict damage at similar distances. Ideal combinations would be Dictator, Hunter, or Viking, with Smoky or Thunder, and perhaps even a Railgun, if you think you could work the map’s obstacles in your favor. Don’t go in for the flag, unless you are flanking a charge, as you will most probably getting stray shots from the weapons Sandstone already protects against. And most importantly, enjoy the beachwear that comes with this paint!

Comments and (constructive) criticism are always wanted and appreciated in the discussion topic and by PM! Thanks for reading, and good luck tankers!

See you on the battlefield!